Opposition calls for protection of livestock in danger zone 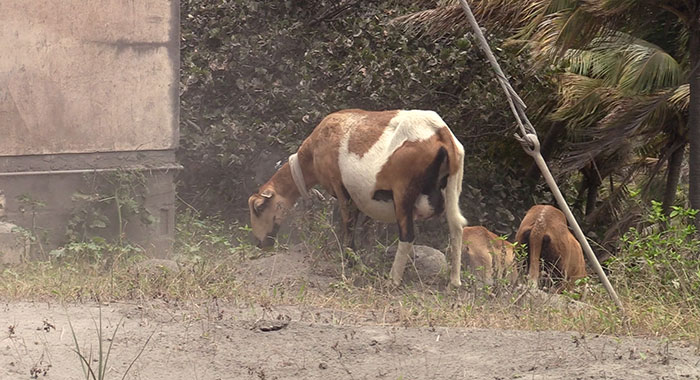 The main opposition New Democratic Party is calling on the government to do more to care for and protect livestock in the areas of St. Vincent that have been evacuated as a result of the eruption of La Soufriere volcano.

NDP President and Opposition Leader Godwin Friday made the call after visiting the danger zones on both the east and west of the island.

He told a press conference in Kingstown, on Wednesday, that the eruption has brought physical destruction, dislocation of people, and great uncertainty.

Friday said that while some evacuees left their home on April 8 when the evacuation order was given, others had left earlier and remain increasingly worried about the state of their homes and other property.

“The natural urge to go to see how they are and even to begin to clean up grows daily, but for personal safety reasons, that urge must be suppressed,” he, however, said.

“Having left their household and farm animals behind, they worry about them. Are their animals being fed?  Have their livestock fallen prey to dogs, that in the absence of their owners, fend for themselves by killing sheep, pigs, and goats, other animals for food?”

He said that in Sandy Bay he met a man who said he had lost three pigs to dogs.

In one of the shelters in Central Leeward, a woman who said she had lost several sheep to dogs, the opposition leader said.

“The question now for us is this: why weren’t those animals moved to safety as had been stated by the authorities, principally NEMO, would be done and an area allocated?”

He said that some of the livestock in the danger zone have tags on their ears but were not evacuated.

The opposition leader said he has seen first-hand the effect of the volcano in the Red Zone areas of Sandy Bay, Chateaubelair, Petit Bordel, and along the leeward coast.

He said that the eruption has turned an already struggling country upside down, displacing some 14,000 people.

“They have left their houses, their livestock, and their familiar surroundings behind in North Windward and North Leeward and have accepted temporary shelter with one another in schools, learning resource centres, church halls and in the homes of friends and relatives in the safe zones,” Friday said.

“This is a very anxious and difficult time for them,” he said, adding that he was not merely speaking of strangers.

He noted that the NDP’s Roland “Patel” Matthews, former MP for North Leeward, and Senator Shevern John, who was the party’s candidate for North Windward in the November 2020 general elections, have had to evacuate their homes in Petit Bordel and Owia, respectively.

“The people who have had to leave their homes must adjust to new living conditions; some in a communal setting in shelters or in sometimes crowded spaces in private homes or in rented accommodation.”

Friday further noted that some persons have moved into rented accommodations not knowing how they will afford the fees if the evacuation continues for much longer.

“And we know, clearly, it will continue for some time from what I have seen from my visit to North Windward and North Leeward…

“I felt it necessary as the Leader of the Opposition and my colleagues as representatives of the people of those communities to be able to see first-hand what is happening,” Friday said.

“This is not a curiosity trip and no one should be venturing into the danger zone without proper approval and for serious valid reasons. The risk is still great and we should heed the warnings of the scientists and the public officials with respect to our safety in those areas.”

He said that some of the emergency shelters still lack basic things such as beds, regular food supplies, and clothing, which might make the occupants comfortable and give them some peace of mind.