A tribute to the late ASP Nicholls 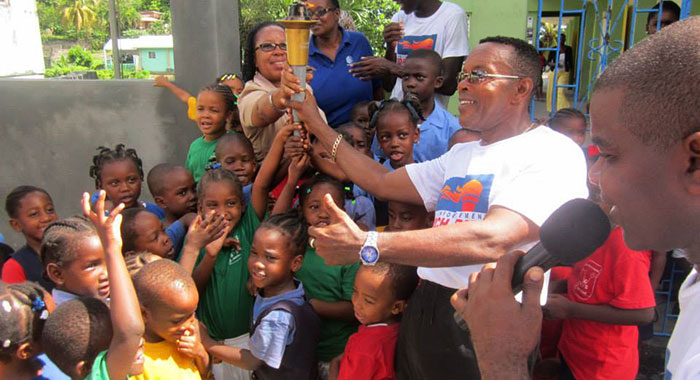 By Garvie A. Thomas

Those words came out of Sgt 301 Jonathan Nicholls’ mouth on Monday Sept. 18 1995 as he was inspecting Guard Number 1 at the Old Montrose Police Training School at Muster Parade.

On Friday Sept. 22 1995 I had to answer to the charge at West. Ronald Christopher was the Commandant and the presiding magistrate. He read the charge: “That you P.C. 649 Garvie Thomas paraded for Muster Parade wearing a pair of dirty regulation boots”.

“How do you plea?” I replied, “Not guilty.” He enquired of my reason for parading with dirty boots and I explained to him that my boots were not dirty.

I informed him that Sgt Nicholls locked me up because I had spoken to his daughter, Karen, on Sunday Sept. 17, 1995. Assistant Superintendent Christopher rebuked Sgt Nicholls and told him that he could not do that.

That was my first run in with Jonathan Nicholls. He was the chief instructor and lecturer at the Old Montrose Police Training School. This man walked with his shoulders upright, he was clean and tidy in his deportment at all times.

He always reverberated that a police officer must be proud, obedient and alert.

Nicholls stepped up to the batting crease boldly, bravely and assertively. During official functions and socials at the Old Montrose Police Station and at Police Headquarters, Jonathan Nicholls was the man on the microphone. He was a master of ceremonies exemplar.

On parades, he took the queue from his mentors namely: Quow, Scott, Telemaque, Latchman, Cumberbatch and Christopher.

Nicholls was not afraid of challenges. There are those in the local constabulary who played “Vedette Must Duck” and “Not Me”, but in Nicholls’ case, he was like Desmond Haynes. He was the opening batsman of and for the Royal St. Vincent and the Grenadines Police Force.

Nicholls was under the astute leadership of Artis Davis at the Public Relations and Complaints Department. He succeeded Davis and he continued to uplift, upgrade and forge a better relationship with the police and the public. He was a partner with the print and electronic media, especially the “Police on the Beat Radio Programme” on Monday nights on NBC Radio, Nine Mornings celebrations, Vincy Mas, Police Christmas Carolling Contest, El Grupo Amistad with Sebastian “Bassy” Alexander, karaoke competitions and other entertainment.

He took me under his wings and mentored me to be his co-host and then as I matured, he told me that I am weaned and I can host the programme on my own. Of course he was an excellent coach! He gave me all the tips I needed to be successful.

Nicholls was a champion of the marginalised, the downtrodden, the afflicted, the neglected, the abused and the less fortunate. He played a pivotal and active role in Special Olympics in St. Vincent and the Grenadines.

He was a compassionate, warm, caring, polite and respectful with and to all whom he came in contact with. He certainly made it his business to look out for the betterment and well-being of humanity.

If we slacked in drills, deportment or in any other discipline, he was the first to come to our aid. He would ensure that our mistakes or unpleasant experiences were corrected and that they were never repeated.

If you didn’t agree with him, he never held any animosity or grudge. He had an infectious smile that he wore with him throughout life. A firm hand shake, a reassuring hug and a solid fist bump were sure to compliment you after his rebuking of you.

I am privileged, proud and honoured to have been a son and a student of this decent human being. He taught me so much about the rigorous road of life.

Jonathan Nicholls and Garvie Thomas were like hand in glove on pertinent topics such as: domestic violence, community policing, the police training school, its way forward and its curriculum and syllabus, anger management training for police officers, youth development, police youth clubs, HIV/AIDS and alcoholism and its toll on police officers and their families.

I became a certified police instructor and lecturer under the guidance, mentorship and leadership of Assistant Superintendent of Police Jonathan Calvert Nicholls. His role as commandant was outstanding and exemplary. He was a born orator, an excellent listener and motivator and a skilled facilitator. His team at the time included: Thecla Andrews, Mahlon Cuffy, Wilmet John, Daniel Prescott, Renrick Cato and yours truly.

Nicholls was underrated, spurned, disrespected and mocked by the powers that be. He was never treated fairly when it came to upward mobility (promotion) in the local constabulary. He surely did not deserve to retire as an assistant superintendent of police. He deserved much more than that.

He placed his country before any political party.

Although he was not given the promotions he deserved, he continued to work diligently right up to his retirement. His promotion did not come from the north, south, east or west. It came from his God whom he praised.

Nicholls was a devoted father and family man. He adored and loved his princesses (daughters and wife) unconditionally. He was very protective of them. I learnt that when I walked with Karen that Sunday afternoon from the Botanical Gardens’ Gate to the Peace Memorial Hall on Sunday Sept. 17, 1995.

A few more days and you must go,

To meet the deeds you have done

Where there will be no setting sun.

You paraded clean and tidy Jonathan Nicholls.  You have gone to meet Your Maker.

We shall meet on that beautiful shore .