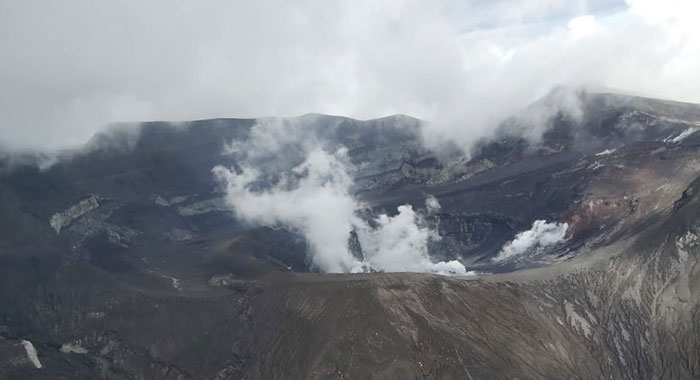 La Soufriere is “continuing its declining trend” since the last explosion on April 22, head of the monitoring team, Lloyd Lynch said on NBC Radio on Monday.

“If you should use the historic eruptions as some sort of reference, Soufriere tends to erupt explosively and go back to sleep pretty rapidly. There have been two cases, I think, where there has been some residual activity, but the residual activity was not as intense as the main event…” he said.

After an effusive eruption that began in late December, La Soufriere erupted explosively on April 9, and had almost 30 discrete events since then.

“We think the system is going back to sleep but in this thing, you always have to be cautious because, as we say in the report, the risk is low but not insignificant.” Lynch said.

“You would recall when the US had this space shuttle programme, the risk of the space shuttle crashing was very, very low, and I think after the third launch, the Challenger had a crash. So you always have to bear in mind that even though the risk is low, it can be significant….”

However, should there be another explosion at the volcano, the monitoring team does not expect it to be significant.

“We don’t expect a large eruption that would affect the heavily populated areas like what was formerly the Red Zone. If, God forbid, you do have a smaller eruption, it’s more likely to send stuff, small quantities of stuff, down the drainage valleys,” Lynch said.

“So it is only in the communities that were built up very close to the drainage valleys that you get any sort of pyroclastic flow activity. And I want to point out that based on what we saw from the helicopter, very little pyroclastic flow material got into the north and north east – in the Fancy headlands, Sandy Bay, Overland, that region,” he said, referring to flights in area of the volcano last week.

“Most of the stuff came down the Larikai and the region draining the Walliabou, Roseau and so on. And, in fact, part of the Larikai crater rim has eroded a bit,” Lynch said.

In the immediate aftermath of the eruption, some 22,000 people, representing over 5,000 families or households were displaced.

As of Monday, some 2,112 people were still in 50 emergency shelters across the country.

iWitness News was unable to determine the number of displaced people who were still in private homes.

The government has given the all clear for people to reoccupy the Orange Zone  communities except for Chateaubelair and Fitz Hughes on the northwest — and the section of the Red Zone south of Rabacca Dry River in the northeast.

The rest of the Red Zone remains a no-go except for cleaning of properties and attending to farms.