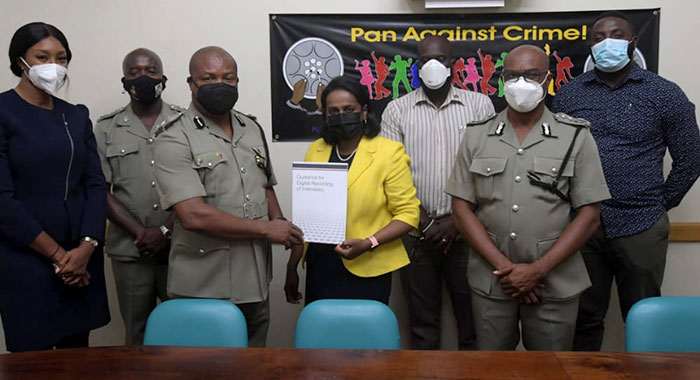 The Criminal Justice Reform project funded by the Governments of the United States of America and the United Kingdom handed over 30 e-learning programmes on human trafficking to the Anti-Trafficking in Persons Unit (ATIPU) of the Royal St Vincent and the Grenadines Police Force (RSVGPF), last Thursday.

The e-learning modules to combat human trafficking were developed as training aids for front line responders who may encounter trafficked individuals as part of their daily duties.

This initiative was developed and funded by UK Immigration Enforcement International (IEI) in Jamaica. This e-learning is being distributed throughout the Caribbean and was first created to assist the Jamaican Constabulary Force and Jamaican Office of National Rapporteur for Trafficking in persons (ONTRP).

The Criminal Justice Advisor (CJA) to Barbados and the Eastern Caribbean, Sirah Abraham presented the e-learning modules to the Commissioner of Police Colin John and the Head of the Anti-Human Trafficking Unit, Assistant Superintendent of Police, Junior Simmons.

During the brief handover ceremony at the police headquarters, Abraham praised the hard work and dedication of the unit and explained the importance of the e-learning program at this critical time.

“The e-learning will assist with building the capacity of frontline responders and improve the responses to trafficking in St Vincent and the Grenadines which is even more important during crises such as COVID-19 and the La Soufriere volcano eruption. The authorities must be sufficiently prepared to help identify the profiles of traffickers, implement actions and strengthen relations with communities to help prevent trafficking and protect victims.”

The commissioner of police on receiving the programme stated:

“I am very elated to receive these e-learning training modules on the behalf of the RSVGPF. The programme will greatly enhance our fight against human trafficking and its serious consequences on victims. SVG has been doing a commendable job in its pursuit to eliminate incidents of human trafficking. This is reflective in the recently released United States Trafficking in Persons Report (TIP Report) which has placed SVG on the Tier 2 List for five consecutive years. So on behalf of the government and people of SVG, the RSVGPF and the ATIPU, I wish to thank the governments of United States and the United Kingdom for this donation.”

The Head of the Anti-Trafficking in Persons Unit said:

“The ATIPU is very happy to be one of the beneficiary of the e-learning programme. The modules dovetail our broad-based and continuous training and awareness raising initiatives with different stakeholders in the fight against human trafficking. SVG has a collaborative approach in its fight against trafficking. And as the CJA stated, the modules will be shared with Immigration and Customs officials. I am pleased to inform that these two departments are critical partners in SVG’s counter trafficking response.”