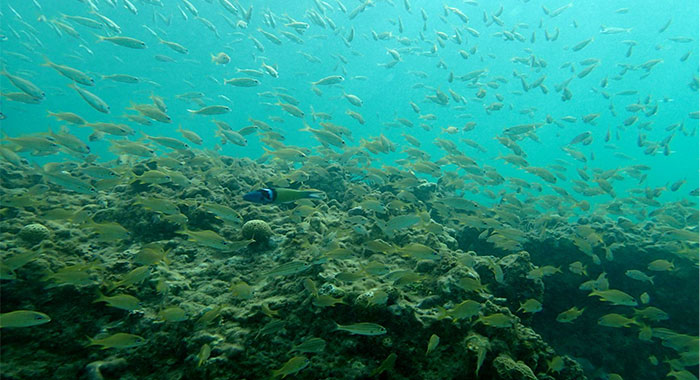 A section of the reef at Indian Bay. (Photo: Nadia Huggins)

The St. Vincent and the Grenadines Environment Fund (SVGEF) has collected 4,163 signatures, most of them Vincentians, who oppose the removal of “dead/ dying” coral at Indian Bay.

The petition was started after an application to the Physical Planning and Development Board by Raffique Dunbar to remove coral reef at Indian Bay was published on July 2.

Dunbar is seeking permission to extract a “dead/ dying” coral reef 350 feet along the coast and 50-60 feet outwards into the sea, a total area of 17,500 square feet.

He is also proposed to place a new artificial reef at about 100-150 feet from the shore –using concrete x blocks, the surface area of which will exceed that of the extracted coral.

Dunbar’s is also asking for permission to deposit imported sand in the area to increase beach width — “beach nourishment”.

Dunbar’s application has generated some public discussion and opposition.

Non-nationals, including people from the Caribbean region and around the world also signed the petition, the SVGEF said in a press statement.

“While coral reefs only cover some 0.2% of the ocean floor, they contain some 25% of marine life species. Some 20% of coral reefs in the Caribbean have died in the past few decades and another 20% severely degraded. In this context, the SVGEF supports the restoration of coral reefs through coral nursery and re-planting programmes,” the SVGEF said.