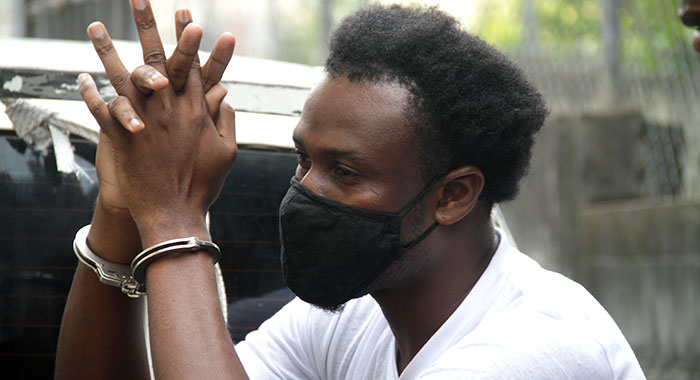 Andy Medica waits in a police pickup truck to be transported to prison on Friday. (iWN photo)

Senior Prosecutor Adolphus Delplesche has praised narcotics investigator Sergeant of Police Irackie Huggins and IT specialist Corporal Angelo Duncan for their work on a case in which a Chateaubelair man was nabbed with guns, ammunition and cocaine in February.

As he made his submission on sentencing at the Serious Offences Court, on Thursday, Delplesche asked head of the Narcotics Unit, Superintendent of Police Hezran Ballantyne to communicate his commendations to the officers.

The court heard the submission one day before Chief Magistrate Rechanne Browne ordered that Andy Medica, 26, a fisherman, of Sharpes, Chateaubelair, spend four years and 10 months in prison on eight cocaine, gun, and ammunition charges.

In his mitigation, defence counsel Grant Connell told the court that Medica is the father of four children: one aged 7 and three 5 year olds.

Delplesche told the court that aggravating in the case was that Medica had been nabbed with three firearms and cocaine.

He said that cocaine was not like “locally grown vegetation” — echoing words that Connell often uses when mitigating on behalf of people charged with marijuana offences.

The prosecutor said he could go light on marijuana, but added that a walk down the street from where the court is located in Lower Kingstown Park will show the impact of cocaine.

Delplesche also highlighted the prevalence of firearm offences in St. Vincent and the Grenadines.

He said that it seems that when La Soufriere erupted in April, the firearms came out, but added that the volcano had been erupting effusively for a while, and appearance referencing to firearm offences were being regularly brought before the court.

“One man with three firearms. If you go up to Soufriere you can call out everybody [in St. Vincent] and the Grenadines and say, ‘Good morning, my neighbour,” Delplesche said, in highlighting the small size of the country.

“He is a young man, yes, but what a young man has to do dealing with cocaine and firearms?” the prosecutor said and asked the court to let its sentence reflect the seriousness of Medica’s crimes.

Medica was found guilty on charges that on Feb. 23, at Prospect he:

· had in his possession two Glock 17 pistols, serial numbers unknown, without a license issued under the Firearm Act;

· had in his possession one Smith and Wesson .357 Magnum revolver, serial number unknown, without a license issued under the Firearm Act;

· had in his possession six rounds of hollow point .357 magnum ammunition without a license issued under the Firearm Act;

· had in his possession 12 rounds of .9mm ammunition without a license issued under the Firearm Act;

· had in his possession 20 rounds of prohibited .233 ammunition without the authorisation of the minister;

· had in his possession 3,014 grammes of cocaine with intent to supply it to another; and

· had in his possession 3,014 grammes of cocaine for the purpose of drug trafficking.

Medica was nabbed after Sergeant Huggins, acting on information about a boat travelling from the Grenadines with cocaine on board, headed a party of narcotics officers to the Prospect Salt Pond.

The narcotics team maintained communication with Coast Guard personnel and, acting on information, arrested on suspicion of conspiracy Nigel Thomas, who was met in the area of Gitts Supermarket.

Acting on further information, Huggins spoke to Corporal Ambris of the Rapid Response Unit in Diamond whose team joined the operation.

Narcotics personnel searched the beach but found nothing illegal. During a further search, Medica was met behind a house. Huggins observed that Medica was wet and barefoot.

When questioned about what he was doing there, Medica replied, “I just here sitting.”

The officers detained Medica and continued the search. Acting on further information, the officers went to an unfinished downstairs of a two-storey house, where they found a multi-coloured JanSport bag.

The officers took the bag to the police vehicle where Medica was being held and searched it in his presence.

The bag also contained a blue testament in the name of “Kerece John”.

Medica denied knowledge of the bag and its contents, but when questioned about the name in the testament, he replied, “That is ah old Bible me get from a girl me use to lime.”

Medica was then arrested and taken to the Coast Guard Base in Calliaqua, where Petty Officer Foyle handed over to Huggins, Unique Howe, of Chateaubelair, and Anthony Mason, of Barrouallie, along with two Samsung cell phones.

The suspects denied knowledge of the bag or its contents.

Howe identified Medica as “Wooh” and the person he gave the ride from Union Island.

Huggins took the men to the Coast Guard Wharf and Howe pointed out a grey and yellow pirogue with the name “Israel” and Medica said that was the boat he was on.