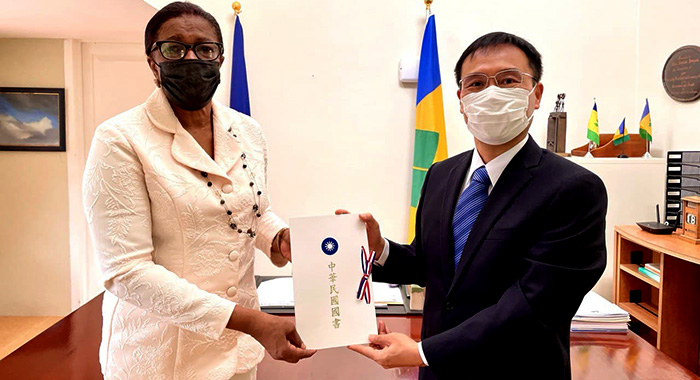 The newly accredited resident ambassador of the Republic of China (Taiwan) in St. Vincent and the Grenadines, Peter Shai-Li Lan has begun his tour of duty.

He holds a Master’s Degree in public health from Harvard University in the United States and has an extensive career in health and diplomacy and held the post of Deputy Representative of the Taipei Economic and Trade Office in Indonesia and former Deputy Director-General, Department of East Asian and Pacific Affairs in the Ministry of Foreign Affairs, Tawian.

Lan’s first public appearance as the newly appointed ambassador was on Sept. 14, when he handing over grant assistance in the sum of US$1,288,527 on behalf of Taiwan to the Government of St. Vincent and the Grenadines.

The grant agreement, which was signed by SVG’s Prime Minister and Minister of Foreign Affairs, National Security, Legal Affairs and Information, Ralph E. Gonsalves, will be used to procure equipment that would be used by the Ministry of Transport and BRAGSA in the ongoing cleanup process following the aftermath of the explosive eruptions of the La Soufriere volcano.

Lan noted the efforts of Taiwan in providing assistance for the relief and recovery efforts after the eruption in the form of relief grants, medical equipment and humanitarian supplies.

He said that the assistance to SVG will continue since SVG is currently in the reconstruction and rehabilitation phase following the volcanic eruption.

Taiwan is currently providing support for three major projects in SVG: a grant for the procurement of heavy equipment, repairing of the Rabacca Bridge, the river cleaning and debris removal (currently under review and preparation). Lan wishes success in the clean-up process and reaffirmed Taiwan’s commitment to assisting this country.

Meanwhile, Gonsalves noted that Taiwan proposed a certain sum of monetary assistance for the cleaning up process.

“Our relations are such that we accept the generosity of our friends but within that generous disposition the Government advises the best way to use the assistance being given.  We always found Taiwan to be flexible in this regard,” Gonsalves said.

The prime minister recognised Taiwan’s effort to assist this country during the COVID-19 pandemic, including the provision of 40,000 surgical masks, six thermal imaging devices which are currently still in use at Argyle International Airport (AIA) for temperature checks, 30 sets of oxygen concentrators.

Similarly, following the eruption of the volcano, Taiwan gave US$300,000 and pledged to collaborate with the government in the rehabilitation and the reconstruction process.

Gonsalves noted that the handing over of the grant of US$1,288,527 that will be used for the procurement of the heavy equipment is Taiwan honouring its pledge towards the rehabilitation process.

He also highlighted other significant projects such as the Taiwan-Employment Gold Card that has been approved by Cabinet that will be done in collaboration with Taiwan and SVG.

Gonsalves thanked Taiwan for their continuous support and generosity to SVG and said that the friendship between both countries is an enduring one.

“Since then, both countries have developed a close bond, a fruitful friendship built on mutual trust, shared values, respect for sovereignty, and cooperation for the mutual benefit of both country’s people in areas of common interest,” the Ministry of Foreign Affairs in Kingstown said.