No clear word yet on reopening of school 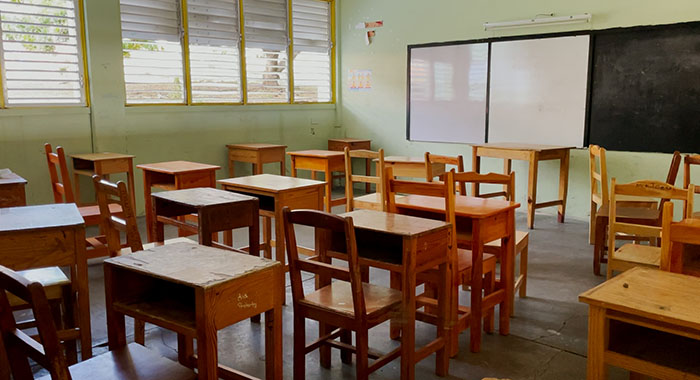 Vincentians may know when Parliament meets today (Thursday) what is the government’s decision regarding the opening of school, amidst a spike in COVID-19 cases in St. Vincent and the Grenadines.

Schools were scheduled to reopen next Monday, Oct. 4, but a spike in COVID-19 cases, including nine deaths since Sept. 9 have raised questions about whether students would return to the physical classroom, for the first time since December 2020.

On Monday, Leader of the Opposition Godwin Friday, noted the absence of a clear word on the government’s plan.

However, on Wednesday, Prime Minister Ralph Gonsalves said that over the last couple of weeks, the Ministry of Education has been doing “a lot of consultations”.

“And they had a very important meeting with the relevant stakeholders on Monday. I got a document yesterday, it was prepared as a consequence of that Monday meeting. A 20-page document entitled simply proposal for the reopening of schools 2021 – 2022 — that academic year, which begins on Monday,” prime minister said.

“But it looks unlikely from the recommendation that we are actually going to start face to face engagement for all the schools. And we will have to have that date. informed by the health protocols. There’s a big uptick in COVID.”

He said that yesterday’s Cabinet meeting was expected to hear a report from Education Minister Curtis King.

“And cabinet will be spending some time today speaking with the minister about this, the Minister presents a report and we will have the relevant public servants,” Gonsalves said on Wednesday.

He said that on the issue of vaccination of teachers, “the numbers are not anywhere near as encouraging as they should be. And I’m appealing to teachers to get vaccinated.”

Regarding the status of school to receive students, the prime minister said:

“The preparation of the schools is that most of them would be ready to receive students. But some are still undergoing repairs and I say there are a couple remaining still, just a few with persons in them…”

Meanwhile, in his comments on Monday, the opposition leader said that clear guidance from the Ministry of Health should be in place so that parents, teachers and students could prepare Monday’s reopening of school and whatever comes thereafter.

“This is something that can’t just be allowed to evolve and then a decision is made on the weekend before people have to do what they have to do to prepare for school,” Friday said.

“It’s evident that because of the upsurge, now, that thinking has to be different. It can’t be the same as a month or two ago when they said they were going to reopen school on October 4th. But what exactly is that thinking?

“What are they going to do? They’re going to have classes? For which classes?  They’re gonna have classes for kindergarten and for grade six and then online is going to be a blended approach?

“If so what sort of preparation has been made to deliver, continue to deliver teaching online? Because to say it’s suboptimal is kind of not really stating it as strong as it should. Many, many teaching hours have been lost.”

He said that  parents and students have really had to adjust to circumstances for which they are not prepared, because the curriculum wasn’t designed to be delivered online.

“So then you have, especially with younger kids, parents and guardians, older siblings, and so forth who have to be sitting there and making sure that they’re paying attention, and so forth, and helping them [with the technology] and the delivery of the programme. “

The opposition leader said that this also affects the productivity of the adults who have to”be essentially substitute, or auxiliary or assistant teachers in this process.

“It affects their productivity as well, because when they could be working, they now have to be spending more time assisting their children, whom they love and want to see do well with the education program. So we know that these things are all very, very real in our lives, and from the looks of it is going to continue for some time,” Friday said.