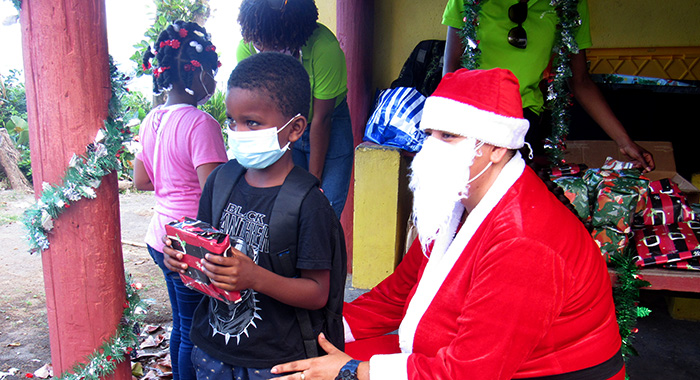 Hairouna Hope, a charitable outreach organisation, brought Christmas cheer to children and youth of North Windward, on Thursday, as it hosted its children’s Christmas event at the Owia Salt Pond Recreational Park.

“Christmas is a time for giving and sharing and, according to the original understanding of Christmas, God gave a gift to mankind and if it’s one thing we should be willing to do at Christmas time is to share and to give,” Conrad Nedd, the group’s president, told iWitness News.

“The expression of God is a gift of love and when we reach out to other people, we need to reflect the love of God in some way,” said Nedd, a physician.

At the event, the children were presented with gifts, as well as food and drinks.

A booth was set up, where prayers and encouragement were offered individually to interested persons.

The group invited 240 children to the event and 180 of them came to the site.

The remaining children were presented with gift in Sandy Bay as their parents were unable to bring them due to payment that day of people who had worked in the road clearing gangs.

The children were from the North Windward communities of Point, Orange Hill, London, Owia, Magum, and Fancy.

The Reverend Adolph Davis, a committee member and volunteer, said the group is not just a charitable organisation but one that aims to touch lives and let people know that God loves them and that people really do care for them.

“We are a charitable organisation making a positive difference in St. Vincent and the Grenadines.”

Davis said the event would be the most exciting time for some children and he hoped the gesture would lift their spirit and would mean the world to them.

He said that he and his wife, Kaushayla began their outreach efforts while their son, Delaan, was president of the Young Leaders programme at the St. Vincent Grammar School.

The group’s purpose “is to share time, effort, knowledge and anything we can do to help in our community,” Nedd said.

It has adopted the Liberty lodge Training Centre and conducted a number of charitable exercises, especially during April’s eruption of La Soufriere, which resulted in the displacement of over 22,000 people.

“Hairouna Hope also caters to the spiritual needs of each individual as you cannot separate the physical need from the mental  or emotional. It’s one person, one being and the more we take care of all those needs; the more wholesome a person will be,” Nedd said.

Although the Needs coordinate  Hairouna Hope , other individuals, groups, and organisations are also partners.

The Nedds and a group of volunteers, which consisted of mainly university students, including Delaan, hosted Thursday’s activity.

Hairouna Hope can be contacted via email at [email protected]