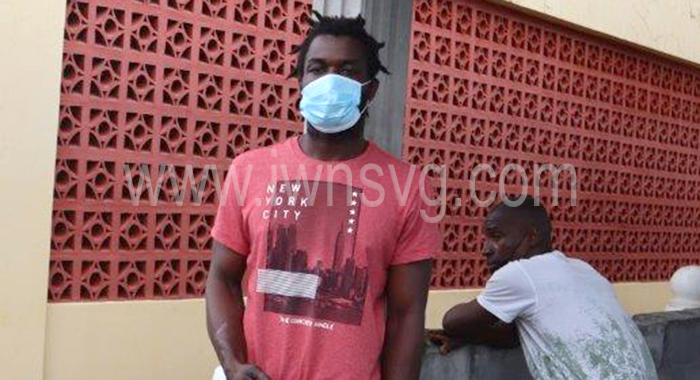 Nickron King outside the Colonarie Magistrate’s Court, sitting at Georgetown, on April 7, 2022.

A South Rivers man has been handed a suspended prison sentence and ordered to pay compensation to his brother whom he wounded by striking him on the hand.

Magistrate Bertie Pompey handed down the sentence on Nickron King, at the Colonarie Magistrate’s Court, sitting at Georgetown, on Thursday, one week after remanding the defendant to prison.

The offences were committed at about 6:30 a.m., at Africano Disco, where Danzel had a dispute with one Collie Johnson who reportedly tore his shirt.

King, who lives near the disco and was sweeping his yard at the time, told the court he heard someone saying, “Kill him! Kill him!”

King said he went over to the disco and pushed his nephew, Danzel, from Johnson who was lying on his back on the ground, while Danzel was stomping and kicking him.

King said he told Danzel to “chill” and asked him if he wanted to kill Johnson.

He said he (King) was just encouraging Danzel to go home.

King told the court that he and Danzel got into a fight and Danzel charged at him with a pair of scissors, so he used the broom to beat Danzel.

Williams then intervened in the fight.

However, the father and son both told the court that King used a piece of iron to strike them, resulting in injury to Williams’ hand, which required surgery.

“They put something on my hand telling me I have to do surgery, but they (Milton Cato Memorial Hospital) take off the cast. It’s steel I now have in my hand.”

Danzel testified that he had had two glasses of scotch and several beers about 3 a.m. on Feb. 5, the date of the fight.

Danzel told the court his uncle beat him with the same iron rod as his father.

He pointed out his lower back, middle of his hands and left elbow to the court, saying he had been struck in those areas.

When Police Prosecutor Corporal Delando Charles inquired about a scar on Williams’ hand, he responded that they were as a result of the incident.

Outside the courtroom, Williams showed two scars from his injury and said that they took almost 100 sutures.

King told the court that he hit both men with the broom but not with a piece of iron.

“I never had iron in my hand nor ever struck anyone with iron,” he told the court.

Pompey told King that he had found him guilty of both charges, he having admitted to hitting both men.

King interjected, saying he wanted to say something.

“Your honour, is two years now I trying to humble myself. I live alone. I now have a work and tomorrow; I getting money. I am asking for leniency. I can’t go back to prison again,” King pleaded with the magistrate.

“I don’t like violence!” Pompey responded and remanded the defendant to prison until April 7, for sentencing.

“You have to pay the man, you damaged his hand and the wound is very serious to me.”

On the charge of grievous bodily harm, Pompey sentenced King to 12 months in prison, suspended for one year.

Further, he has to pay compensation of EC$4,000 in six months or spend 12 months in prison.

King was reprimanded and discharged on the assault charge.