Latham’s phone had SMS to ‘Avi’ saying ‘call the shot’ 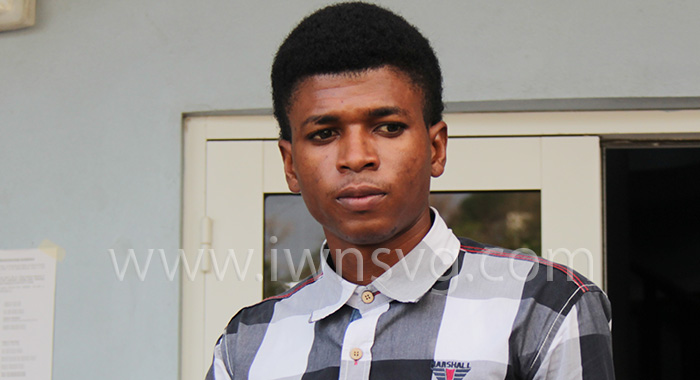 The defendant, Zackrie Latham, outside the Calliaqua Magistrate’s Court on May 16, 2022.

A phone belonging to the ex-police officer charged in connection with the missing guns and firearms from Georgetown Police Station had on SMS messages to someone saying “everybody sleeping. Call the shot”.;

Detective Sergeant Syon Shoy, an information technology specialist, told the trial on May 16 that he forensically analysed the phone at the Regional Security Service (RSS) laboratory in Barbados, where he is on secondment.

Shoy testified virtually from Barbados during the trial at the Calliaqua Magistrate’s Court, which later upheld no case submissions on 10 of the 13 charges against the accused, Zackrie Latham, 26, of New Grounds.

In his May 16 testimony, Shoy told the court that on July 21, 2021 three devices belonging to Latham were submitted for forensic analysis.

He said they were accompanied by a copy of a search warrant and the facts of the case on each device.

He said that contacts were extracted from the red and black phone and there was one contact of interest to the investigators, bearing the name “Avi” and  “One Dan” as it was saved and bearing a cellular number that he quoted to the court.

He said that call logs showed 14 calls that were of interest to the investigator between “Avi” and Latham’s device.

Shoy said 30 images were extracted from a micro SD card in the device and 54 from the device.

These images contain pictures of cash in Eastern Caribbean and Barbadian dollars.

Some of the images show photos of firearms and ammunition and also a photo of a crowbar, Shoy told the court.

He said that SMS chats were extracted including a chat between the number saved as “Avi” and “One Dan” and the device.

The detective said one SMS from “Avi” to Latham’s device said, “Me day in the back ah nah”.

Shoy said no findings of evidential value as it relates to the investigations and facts were found on the other devices.

During cross examination by defence Counsel Grant Connell, Shoy told the court he could not recall when he sent the devices back to St. Vincent but that he put it in an envelope and sent it via the RSS aircraft.

He said that when someone copies a document at the RSS lab they have to sign it out.

“You don’t have to tell me you in the real world. I understand,” the lawyer said, taking a jab at the local constabulary.

Shoy said that the documentation establishes a chain of custody.

Asked who signed for the document in St. Vincent, Shoy said, “I think Sergeant Duncan of the IT Department received it at the airport from me.”

He said the document was then handed over to the person at the IT Department who  distributed it.

The detective said that the investigator of the alleged burglary at the police station, Assistant Superintendent of Police, Oswin Elgin Richards had not contacted him to verify the content of the report.

He said no one from the Royal St. Vincent and the Grenadines Police Force or the Director of Public Prosecutions office had contacted him to verify the content of the report.

Shoy said that someone from the DPP’s office had contacted him to acknowledge receipt of the report.

He said that according to the data extracted from the device, four of the messages were not sent.

The forensic analyst said that a report on the phone for “One Dan” was also sent to St. Vincent, but the number to which Latham’s device had sent the message did not correspond with One Dan’s device that was sent for analysis.

He said he could not say who was the owner of the phone number that was attached to Latham’s phone.

He confirmed that one of the messages was timestamped May 29, 2021.

Shoy said that the timestamp on a device can be adjusted but it would have to be done manually.

“Any time can be adjusted on any device but there would be a timestamp if it is changed over,” he said.

“Once you have the phone in your possession, an expert in the field such as yourself, can basically do anything once the phone is open. Correct?”

“You are correct,” Shoy said.

Latham’s trial continues on May 30.