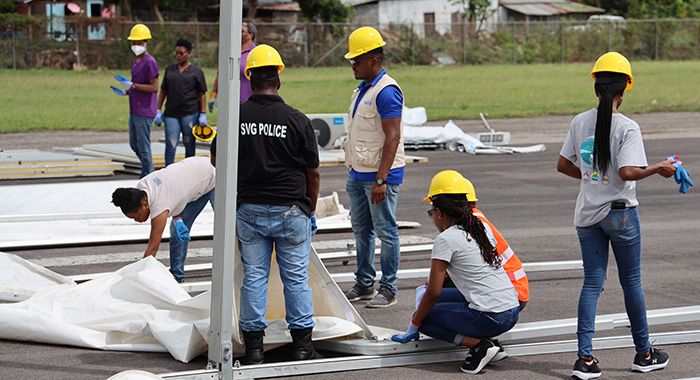 This workshop, which commenced on Monday, focuses on the critical and immediate actions to be taken to ensure efficient and effective emergency logistics coordination and management of essential relief items in a disaster.

As part of the workshop, national institutions involved in emergency response in the country, including security forces, Cadets and personnel from various government departments were brought up to date on the role of CDEMA and its Regional Response Mechanism (RRM), WFP Caribbean, and the National Disaster Management System.

This was done during a classroom session  at the Seventh-day Adventist Mission conference room on Monday .

On Tuesday, participants were engaged in a hands-on physical training on the set up of the mobile storage units (MSU) donated by the WFP following the explosive eruptions of the La Soufrière volcano for use in future crisis and the use of the fire extinguishers.

This training took place at the decommissioned E.T. Joshua Airport and continued on with hands on training on the set up of the prefabricated offices donated by the WFP and the use of generators.

This was followed by the breakdown and storage of the mobile storage units and the prefabricated offices.

On Thursday , the participants will engage in a debriefing and evaluation session that will be followed by the official closing ceremony and distribution of certificates.

This workshop is one of several events taking place across the English-speaking Caribbean to prepare countries to meet the needs of impacted communities should disaster strike.

CDEMA, WFP and partners like the European Union and USAID Bureau of Humanitarian Assistance continue to support the Government of St. Vincent and the Grenadines and other governments to improve systems, assets, and human resources for greater climate resilience and in managing other types of crises.

The National Oceanic and Atmospheric Administration predicts a 65%  chance of an above-normal 2022 Atlantic Hurricane Season, with 14 to 21 named storms (winds of 39 mph or higher), of which up to 10 could become hurricanes (winds of 74 mph or higher), including three to six major hurricanes (category 3 or higher with wind speeds over 111 mph). Preparedness is key to meeting the needs of affected and vulnerable people following a major climatic event.