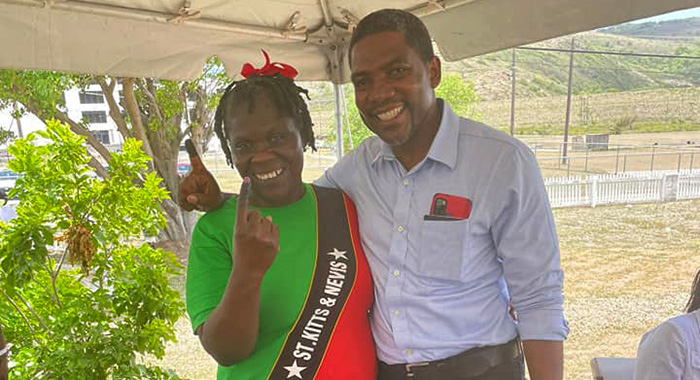 BASSETERRE, St. Kitts (CMC) — Seven years after being booted out of office, the main opposition St. Kitts Nevis Labour Party (SKNLP) is heading back into the corridors of power, winning six of the 11 contested seats on the twin island Federation.

Preliminary figures released by the Supervisor of Elections, Elvin Bailey, more than 17 hours after the official close of polling on Friday night, showed that Prime Minister Timothy Harris was the lone successful candidate for his People’s Labour Party (PLP), so too, Shawn Richards of the People’s Action Movement (PAM) while Mark Brantley’s Concerned Citizens Movement (CCM) won all three seats in Nevis as it had done in the June 2020 general election.

The three parties had formed the coalition Team Unity administration that Harris led before he was forced to call the early poll three years ahead of the constitutional deadline after his Cabinet colleagues filed a motion of no confidence in him.

Harris averted the debate by dissolving the Parliament and calling for general election on Aug. 5.

“So far, based on the results I have heard in St. Kitts, it appears that the St. Kitts-Nevis Labour Party has won a majority of the seats and so I say congratulations to Dr. Terrence Drew and the rest of his team,” said Richards in a broadcast on Saturday.

“To that party I say the voters have spoken … Ultimately you have a responsibility to all of the voters in St. Kitts-Nevis and as such you must look out for all of the people,” said Richards, who was elected for a fifth consecutive time as the parliamentary representative for St. Christopher Constituency Number 5.

The SKNLP, led by the Cuban trained medical practitioner, Dr. Terrence Drew, who will become the Federation’s fourth prime minister, had campaigned on the need to liberate the country from the clutches of the coalition Team Unity government.

Drew polled the highest number of votes in the election, receiving 2,950, while Chesley Hamilton of the PAM got 895 and the PLP’s Andrew Bass 761.

“It is an amazing outcome for the party,” said regional political analyst and pollster, Peter Wickham, recalling the defeat the party had suffered in the last two general elections.

Political strategist Hartley Henry blamed the coalition for what he described as “an unnecessary election”, adding that the results were “a rejection of an administration that had become disconnected from the people”.

Both Wickham and Henry said they did not expect the PLP and Harris for that matter to have any influence in the political future of the Federation, hinting also that the defeat may also signal the end of Harris’ political career that has spanned more than 25 years.

Among the victorious SKNLP candidates is former prime minister Dr. Denzil Douglas, who before the 2015 general election, had been among the longest serving leaders in the Caribbean Community (CARICOM).

During the campaign Douglas dismissed suggestions of a rift within the hierarchy of the then opposition SKNLP, insisting that he is supportive one hundred per cent of Drew, who took over the leadership of the party last year when Douglas stepped down after 33 years and 20 years as prime minister.

Douglas polled 1,926 votes as compared with 98 for PAM’s Troy Flanders, 309 for Marc Williams of the PLP and three votes for Carlton Dupont.

For his part, Harris received 1,266 votes as against 176 for PAM’s Lincoln David-Pelle and 903 for the SKNLP’s Leon Natta-Nelson.

There are 11 seats at stake in the 15 member Parliament with the Governor General nominating the other four seats.

The lengthy period in announcing the election results was not missed on the former Jamaica prime minister, Bruce Golding, the head of the Observer Mission of the Organization of American States (OAS), one of two observer groups that monitored the election. The other team came from CARICOM.

“One recommendation that we have consistently made, in 2011 and again in 2015, is that we need to avoid any extended period of time between the closing of polls and the declaration of the results,” said Golding.

He said when the polling stations are officially closed at 6 p.m. on election day “and 24 hours later, the people of St. Kitts and Nevis are still in the dark as to who won the election, you create too much opportunity for suspicion, contention, for anxiety, for conspiracy theories that cause people to question the process and not to have the level of confidence in the process that they need to have.

“People need to know that when a government takes office, that government was properly elected, and you run the risk of undermining that confidence,” Golding told a news conference after his team observed Friday’s electoral process.

“We have recommended before, and we are going to recommend again; as is done in almost all other Caribbean countries, that if the votes are cast here [at polling stations], then the votes must be counted here,” said Golding.

“After six o’clock, after you’ve checked off all the materials and do the accounting that has to be done, count the votes in the presence of the agent of the parties and prepare a certificate indicating what the results are and then have that transmitted to the returning officer,” he said, adding ,“if you do it that way, then it means that the counting can be proceeding in all the polling stations at the same time, and you’d be able to have a result before nine o’clock in the evening”.

Golding said that the OAS mission will urge the new government to “attend to the issues of electoral reform and to do it early; to have the necessary discussions, consultation; not only among the political parties but with the society, with the public; have them properly informed so that we can have those improvements put in place long before the next elections are due”.