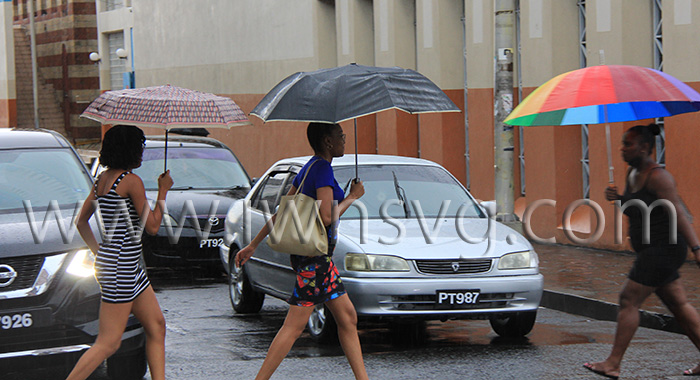 Pedestrians use umbrellas during a break in heavy rain in Kingstown on Sept. 29, 2022. More rain and high winds are expected across St. Vincent and the Grenadines this week.

The St. Vincent and the Grenadines Meteorological Services has issued a Flash flood watch for the country, which will remain in effect until further notice.

A bulletin at 6 p.m. Tuesday said that a strong tropical wave with a 70% chance of further development within the next five days is expected to affect the country from Tuesday night, with activity persisting over the next few days.

“As a result, pockets of moderate to heavy showers, periods of light rain and isolated thunderstorms are predicted,” forecasters said.

“Model guidance suggests that rainfall accumulations of 75-100 millimetres (approximately 3-4 inches) with isolated higher amounts in mountainous areas are possible by the end of the week.”

Therefore, the weather advisory that was already in effect for a low risk of flooding for SVG has now been upgraded to a flash flood watch until further notice.

A flood watch is issued when conditions are favourable and there exists the possibility of flooding during the watch period.

This flash flood watch may be upgraded to a warning if conditions warrant.

In addition, strong wind speeds ranging between 35 to 55 km/h (22 to 34 mph) with higher gusts near showers are forecast to accompany the tropical wave.

Seas are forecast to become moderate to rough in open waters with swells ranging between 2.5 to 3 metres (8.2 to 9.8 ft).

Therefore, the following advisories came into effect for SVG from today, 6 p.m., Tuesday:

Only vessels capable of withstanding swells ranging between 2.5 to 3 meters (8.2 to 9.8 ft) should venture out. Sea bathers are advised to stay out of the water.