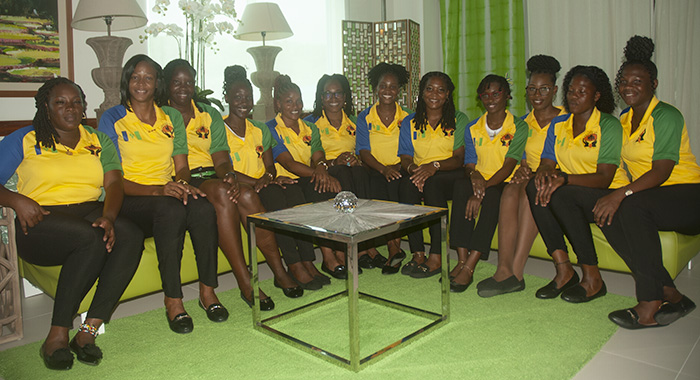 The St. Vincent and the Grenadines National Female Senior Netball Team is slated to have its first practice match today (Friday) ahead of its first game on Sunday in Jamaica in the qualifiers for the 2023 Netball World Cup in South Africa.

SVG will play the United States at the National Indoor Centre in Kingston.

The team arrived in Jamaica on Thursday and were greeted on arrival by Marva Bernard, president of Americas Netball and Dwayne Gutzmer, head of the Local Organising Committee.

The three Cabinet ministers wished the team success in their endeavours in Jamaica.

During the meeting, the team received a telephone call from Prime Minister Ralph Gonsalves from Barbados, where he was on official duties.

“My understanding is that SVG National Netball Team is quite a formidable team and has demonstrated that over the years. And so, we are looking forward that at the end of the competition to see the flag of St. Vincent and the Grenadines flying really high,” Daniel said.

“We depend on you. WE encourage you. Do your best, play as a team, make us proud,” Daniel said.

“I am very delighted that we have a wonderful team of players. I have gone to several of their training sessions and seen them and I believe they are fit and ready to participate in the championships over the next couple of days and to return to St. Vincent and the Grenadines with the trophy in preparation for next year’s international companionships to be held in South Africa.”

The minister urged the players to always remember that teamwork “is what makes you win.

“You cannot go there and play for yourself. You have to play as a member of the St. Vincent and the Grenadines National Netball Team.”

Gonsalves wished the team success in their efforts in Jamaica.

Meanwhile, president of the St. Vincent and the Grenadines Netball Association, Natasha Baptiste expressed confidence that the team would be successful in Jamaica.

“These 12 young ladies who have been selected are energetic, they are hardworking and are dedicated to the cause,” Baptiste said.

“We have recently developed a mantra, which thanks to Mr. Robertson Henry, ‘12 players…One Flag… One Country… One Mission… One Road to South Africa.”

Baptiste said she is confident that the teams have what it takes to qualify “because the young ladies are mentally prepared for this task.

“We want to bring back an independence anniversary gift to the nation because we return to the country on the 26th October.

SVG is seeking to grab one of two available spots. When the qualifiers end on Oct. 22, two countries apart from Jamaica are expected to qualify for next year’s world cup.

Henry, a sports journalist and photographer, is accompanying the team as media liaison.