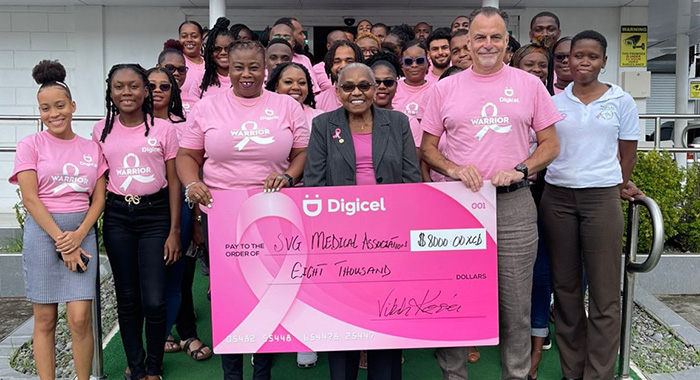 DIGICEL SVG has joined millions of people across the world in observance of Breast Cancer Awareness Month.

For another year mobile provider has collaborated with the SVG Medical Association to observe Breast Cancer Awareness Month.

It has been more than 15 years since the SVG Medical Association began its programme to raise awareness of the disease and to support women who are afflicted by breast cancer.

Digicel’s cash donation to the organisation will be used to assist with covering the cost of laboratory tests, medication, travel costs for radiotherapy within the region, as well as for the Association to provide the occasional socioeconomic assistance when needed.

“Digicel remains steadfast in its commitment to supporting Vincentians as they live their best lives, digital or otherwise, which in this instance means helping to improve wellbeing by fighting non-communicable diseases,” Brenda Barbour-Charles, Digicel’s chief operating officer said.

Head of the SVG Medical Association, Dr. Rosalind Ambrose expressed heartfelt gratitude for Digicel’s contribution to the cause, also noting that the telecommunication provider was one of its initial partners when the association began its mission almost two decades ago.

October is Breast Cancer Awareness Month, which helps to increase attention and support for awareness, early diagnosis and treatment of the illness, as well as palliative care for those facing this cancer.