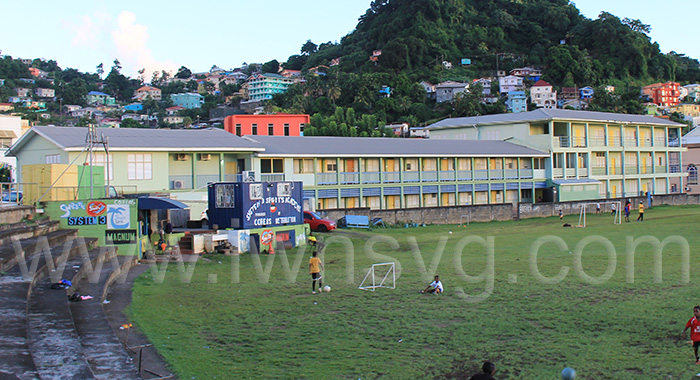 The government is considering demolishing Thomas Saunders Secondary School, which has been identified for major repairs.

Students of the secondary school, which was established in 2005 are now being housed at one of the two purpose-built temporary campuses at the decommissioned ET Joshua Airport in Arnos Vale.

However, Minister of Finance Camillo Gonsalves said that the school, which was converted from the Richmond Hill Government School to a secondary school then repaired and expanded, needs more work than first thought.

“… We are now having a discussion … about whether or not it makes sense to continue with the repairs we had planned or whether we should just lick down that school and build it over,” Gonsalves said on radio recently.

“Now, there is a significant difference in money between repairing a school and building over a new school. But our engineers visited the area [on Tuesday]. We see some of those columns from Richmond Hill days starting to show some structural strain.

The then 50-year-old Richmond Hill Primary School had a wooden floor when it was converted to a secondary school in 2005.

The wooden floor was later replaced with concrete and a new three-story concrete wing added.

Gonsalves said the conversation is taking place about whether to demolish the school, adding that a decision has not been taken as yet.

“I have to be advised by the engineers. But there is a possibility that instead of the young men and women of Thomas Saunders being out there for nine months, which was the original plan, they may have to be out there for two years — two full school years,” he said.

He said that if the government decides to rebuild the school from scratch, this will have different implications.

“So, that is a decision that we expect to arrive at when the prime minister returns from Montserrat,” the finance minister said. Prime Minister Ralph Gonsalves, who was out of state on official duties, returned on the weekend.

“But, always, our concern there is the safety and the comfort of the students and the teachers. But primarily, we want to make sure that our students are safe and comfortable.”

He said the decision about what to do with the school will not be a political one.

The finance minister noted that the school is located on a small piece of land.

“… but there is a lot you can do still if you are building from scratch to build that school over. But there will be time necessary then for designs and construction and so on that would change things,” he said, adding, “But that is something we are looking at.”