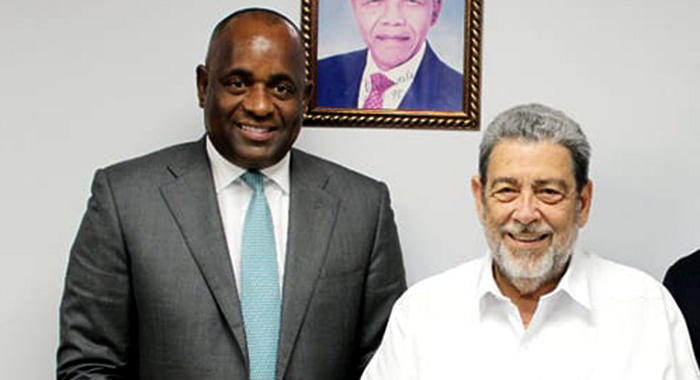 KINGSTOWN, St. Vincent (CMC) – St. Vincent and the Grenadines Prime Minister, Ralph Gonsalves, is accusing the main opposition New Democratic Party (NDP) of trying to “trick the gullible” about the situation in Dominica, where a snap general election has been called for Dec. 6.

Gonsalves said the main opposition parties in Dominica, which are boycotting the polls over electoral reform, are doing so out of fear that they would be trounced at the polls.

Earlier this week, NDP and Opposition Leader, Godwin Friday expressed concern about elections being called in Dominica amidst the controversy over the electoral reform.

But Gonsalves, who had earlier said that he was confident that Prime Minister Roosevelt Skerrit’s Dominica Labour Party (DLP) would be returned to office with no fewer than the 18 of the 21 seats that it won in the 2019 poll, said the NDP has criticised the decision to call the snap poll because the electoral reform is yet to be completed.

“Well, this is pure political opportunism and foolishness on the part of the opposition here,” Gonsalves said, noting that Dominica, which has a population of about 70,000 and over 40,000 registered voters, has been holding general elections since 1951.

“They do not have the picture identification process that we have and I understand that is part of the reforms which they want to introduce. But the base point I want to make, they have been having free and fair elections since 1951,” Gonsalves said.

He said that international observers from the Commonwealth, CARICOM, local observers, and the Organisation of American States (OAS) have all declared the elections in Dominica free and fair.

Gonsalves said this was the case even as the OAS, “under the current leadership of the OAS, has a hostility to progressive government. But the mission was a good and objective mission in Dominica.”

He, however, said there are “some sore losers. When you can’t get the affection of people and you lose, you do like Trump (US former president Donald) and say the election is rigged…”

Gonsalves said this was the situation here when the NDP contested the results of the 2015 general elections, adding that the court threw out the petitions following a full trial.

“And what did Friday do? He went on the street and say, ‘No justice, no peace!’ … Not only did he damn the electoral system, because he lost, he then turned around and impugn the integrity of the court and in the process, bad mouth this country, put it under a form of siege and certainly the electoral office and the supervisor of elections…”

Gonsalves said Friday is now “taking up cudgel for the people in Dominica, the opposition in Dominica, but seeing it through the lens of he, himself having lost the elections.

“It’s classic Trump,” Gonsalves said, adding that the fundamental questions are whether the elections in Dominica are free and fair.

Gonsalves said that it is not a question of whether the system can be improved, noting that before electoral reform here in 1982, electors did not need a photo ID to cast ballots, acknowledging the new controls strengthened the system over the one which existed from 195.

But it didn’t mean that the elections before 1984 were not free and fair. It’s only that this system is improved. They’re more transparent.

“So, I just don’t understand this maligning of Dominica so that because the reform process is still underway, you don’t mean that you can’t hold an election under a system which has produced free and fair elections.”

Gonsalves said the Dominica Freedom Party, which says that it is not contesting the elections, is a shadow of its former self.

“Nobody in Dominica talk about the Dominica Freedom party. So, they using an excuse for their lack of support and lack of preparation. And in the case of the UWP, the United Workers Party of Dominica, their leaders resigned over a month ago and they are in complete disarray.

“So, they are trying to dress up their terrible political situation as high principal, and the opposition here in St. Vincent giving support and succour to that because they are seeing the issue through their own lens.”

He accused the opposition here of hypocrisy, in light of their campaign against proposed changes to the Constitution, in the 2009 referendum.

“What kind of hypocrisy now they talking about? All they’re interested in really is power naked. And this mealy mouthed, kind a comment by Friday, just wouldn’t wash. They only are there, opportunism and the same playbook like Donald Trump is what they are dusted off,” Gonsalves said.

“They have a lot of tropical Trumps. One was in St. Lucia and lost, one was in Brazil and lost. And you have them in Dominica and they lose. And the one in St. Vincent also, the tropical Trump from Bequia and the same kind of hypocrisy and pretence and a lot of superficial foolishness designed to see if they can trick the gullible,” Gonsalves said, reiterating his view that the elections in Dominica will reflect the will of the people.

“Now, I think I’ve said the broad outlines of this, I’m absolutely sure that the elections in Dominica would be free and fair,” Gonsalves said, adding that the opposition parties are choosing not to participate “because they can’t win, they will be humiliated.

“So, they want to impugn the integrity and legitimacy of the government, if they go and win all the seats and nobody else contests against them.”

He said the same thing happened in Trinidad and Tobago in 1971,”and then sense came back to the opposition and they went and participated under the same electoral system.

“When you know you’re going lose and you’re going lose bad … all kind of red herring you bring across the trail. You think if they were strong and they thought they go win the election, they will not go and fight.”