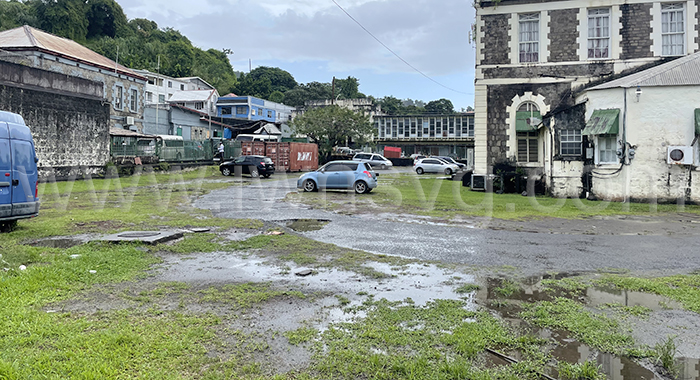 Jurors in an ongoing trial at High Court No. 1, in Kingstown, as well as police officers assigned to the court were among people affected by the ban on parking in the High Court yard.

And, on Friday, Registrar of the High Court, Andrea Young sent lawyers an email saying that parking in the Court House Yard would be limited to High Court Office staff, people employed at the House of Assembly, current Member of Parliament when there is a sitting of Parliament, and counsel employed at the office of the Director of Public Prosecution/National Prosecution Service.

Parliament met on Monday, then, on Tuesday, jurors in cases before the court were turned away when they drove up to the court building.

Some of them had to park as far away as Wilson Hill, almost a mile’s walk/drive away, and walk back to the court.

iWitness News was reliably informed that some police officers who are assigned to the court were also turned away when they drove up to the High Court.

Sources in the know tell iWitness News that an opposition politician came to the High Court building on Tuesday, one day after a sitting of the National Assembly, and opened the gate and let himself in.

One police officer remarked that were he on duty he would not have prevented the lawmaker from entering the compound, which is also home of the House of Assembly.

“What were you going to do? Salute him then turn him away?” a civilian commented, a reference to the fact that police officers in uniform are expected to salute Members of Parliament.

Gonsalves has said that the lawyers parking in the Court House yard is a security issue.

However, people familiar with the happenings at the compound for years said they have never heard of a potential security incident there involving a lawyer.

Others, including social commentator and former Speaker of the House of Assembly, Jomo Thomas, have noted that lawyers can park for free across the street.

Thomas said that the policy of banning lawyers from parking in the High Court yard does not make any sense.