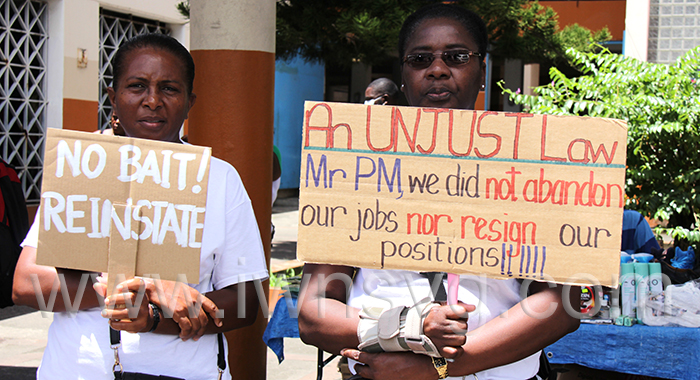 Dismissed teachers at the protest in Kingstown on Aug. 18, 2022. The court is being asked to rule on whether public sector workers, by not taking a COVID-19 vaccine, as ordered by the government, abandoned their jobs.

When the government instituted the vaccine mandate law last year, it said that certain unvaccinated public sector workers could not turn up to work.

And, that is an issue at the heart of the lawsuit brought against the government in connection with the dismissal of workers as a result of the vaccine mandate.

On Wednesday, as the trial opened before High Court judge, Justice Esco Henry, lead counsel for the claimant, Cara Shillingford-Marsh argued that regulation 8(1) and 8(2) of statutory rule & order (SR&O) 28 of 2021 (the vaccine mandate law) were illegal insofar as they purport to declare the circumstances in which an employee must be treated as absent from duty without leave, and to have abandoned his or her job.

Shillingford-Marsh argued that the natural and ordinary meaning of “abandonment” is that the individual must have acted voluntarily.

“The individual must have voluntarily left his or her position,” she said.

However, Senior Counsel Anthony Astaphan, the head of the legal team for the respondents (the government), citing a case from the Privy Council, argued that someone can abandon their job even when present.

Cara Shillingford-Marsh said the findings in the St. Lucian case of Huggins Neal Nicholas v. the Attorney General and the Teaching Service Commission are similar to the vaccine mandate case.

In the case of Nicholas, the appellant was suspended from duties and, as a result of that suspension, could not perform his duties as a teacher.

She said that her clients did not abandon their jobs.

“They did not abandon them, in the legal sense as defined by the Court of Appeal and in the ordinary and clean usage of the word using the literal rule. It cannot be said that these claimants abandoned their jobs in a situation where they attempted to go to work and they were prevented from doing so.”

The lawyer emphasised “voluntariness”, saying this factor must have been present for abandonment to have occurred.

She said the effect of regulation 8(1) and 8(2) “is to attempt to change the definition of abandonment.

“Without regulation 8(1) and 8(2), the Public Service Commission, based on the Nicholas Court of Appeal decision, could not have found that the claimants abandoned their position, because the circumstances of this case do not fall within the ordinary meaning of abandonment.”

She argued that by making regulation 8(1) and 8(2), the Minister of Health changed the meaning of abandonment under the Public Service Commission regulations.

Shillingford-Marsh said that the law, under which the minister of Health purported to have acted, simply authorised the minister to create a COVID-19 immunisation programme.

She said that law cannot be used to justify interference with the Public Service Commission regulations “to the extent that the minister is changing the definition of abandonment”.

Shillingford-Marsh pointed out that the Commission says the Public Service Commission “shall, in the exercise of its functions under this Constitution, not be subject to the direction or control of any other person or authority”.

The nation’s supreme law further says the PSC “may by regulation or otherwise regulate its own procedure and, with the consent of the Prime Minister, may confer powers or impose duties on any public officer or on any authority of the Government for the purpose of the exercise of its functions”.

Shillingford-Marsh said the Constitution gave the PSC its authority and therefore, Parliament, “by ordinary legislation, cannot in any way interfere with the powers given to the Public Service Commission by the Constitution”.

She said that only the PSC can amend its regulations.

“And we have proven, we have shown that by purporting to change the ordinary meaning of ‘abandonment’, the minister in fact attempted to or purported to change the Public Service Commission regulations,” Shillingford Marsh argued.

“So, we’re saying that insofar as this was done, this was unlawful, it was ultra vires, and it was in breach of section 77(13) of the Constitution since sections 43(b) did not give the Minister of Health any powers to amend the Public Service Commission regulations and it could not have done so since it was ordinary legislation.”

However, Astaphan contended that contrary to the arguments of the claimants, the Minister of Health had not changed the definition of “abandonment” intended under regulation 31.

He said the London-based Privy Council – SVG’s highest court — says abandonment is not necessarily absence from work with intention not to return.

“That is only one form of abandonment,” Astaphan said, adding that “abandonment” “could equally involve no offence at all.

“For example, when an employee denounces his job in the course of a heated argument with his employer.”

He said there is no legislative restriction on the executive (Cabinet) or on Parliament “as to what constitutes abandonment … if public health regulations are made in the public interest and under the Public Health ordinances”.

The lawyer argued that, having regard to, among other things, the terms and conditions of employment of the public servants, if they refuse, without cause, to take the vaccine or refuse, without cause, to apply  for an exemption under the medical exemption provision, or refuse to apply and/or unable to get an exemption on religious grounds and they refuse to take the vaccine without reasonable cause, “then one could seriously argue that what happened here was not just being absence without cause but abandoning the job because you refuse to comply with the provisions, which the chief medical officer says is in the interest of the public officers’ health and in the interests of public health”.

He said that as far as the Privy Council is concerned, “there is no one definition of abandonment”.

Astaphan said the Cabinet had, in fact, also approved a special measure, adding that there was nothing in regulation 8(1) that concerns the procedure of the PSC.

“On the face of it, 8(1) one is referring specifically to public health measures recommended by the Chief Medical Officer, as well as the sort of terms and conditions you would normally find in a contract of employment,” Astaphan said, adding that Regulation 8(2), “merely incorporates the regulations of regulation 31”.

He said that the case of Thomas v. The Attorney General indicates that the sole function of the PSC “is to appoint, remove and exercise disciplinary control”.

Astaphan argued that the PSC has “no authority to lay down terms and conditions of employment.

“They have no authority post-independence Constitution to make any regulations concerning the terms and conditions or, indeed, measures under the Public Health Act.”

Astaphan said the obvious reason for incorporating PSC regulation 31 into the vaccine mandate regulations was to give the PSC “the final say or perhaps the only say” on whether or not somebody who has not complied with regulation 5(1) or 8(1) or to deem them to have resigned or abandoned their job.

He further argued that by making provisions for the PSC “to play a part in all of this is entirely consistent with the role the Public Service Commission is intended to play”.

He said it was entirely a matter for the Minister of Health, on the recommendations of the Chief Medical Officer and for the cabinet and the Minister “to make decisions to ensure compliance with the regulations that have been made without, in any way, usurping the authority of the Public Service Commission…

“The Public Service Commission has no authority to determine terms and conditions of employment,” Astaphan said.

He said its “sole purpose is to make sure that when the legislature, the Cabinet make rules governing public health or terms and conditions of employment, that the public service make the substantive determination on whether or not there was a cause for removal, disciplinary control and whether or not in the circumstances of this case, there was non-compliance with the regulations, which is admitted by all of the claimants in their case.

He said any public officer who was adversely affected by the provisions of the regulations has the right to approach the PSC and make a case that the basis upon which they were deemed to have been resigned or absent from work “are not true or have been changed or have been rectified and, therefore, I am entitled to be reinstated in the public service.

“It may not be as clearly and cleanly drafted as we would want but there is clearly no question about the intent of that provision.”