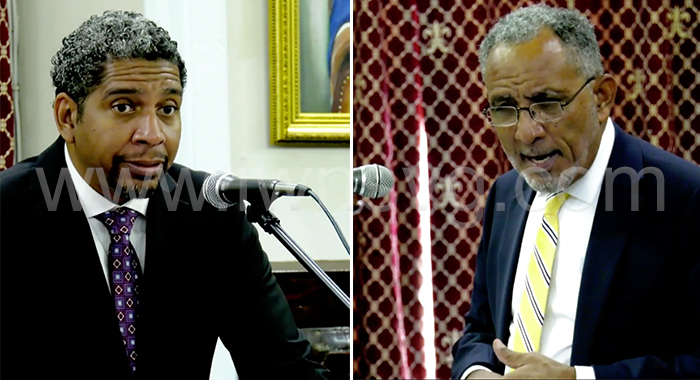 The government will, on Thursday, launch a youth internship programme, which the opposition New Democratic Party (NDP) says is the same as it proposed in its 2020 election manifesto.

However, Minister of Finance, Camillo Gonsalves said that claiming the programme as its own is evidence of the “the five stages of NDP opportunism”.

The six-month internship is designed to better equip the nation’s youth to participate in the new and dynamic global space, the Ministry of Finance said in a press release on Monday.

“The selected ON-SITE participants will be placed at private sector businesses/firms across a wide range of industries and they will receive a monthly stipend that is commensurate with their achieved levels of education and skillset. That is: pre-secondary, secondary, post-secondary and university level,” the ministry of finance said.

“It is anticipated that ON-SITE will create a more dynamic and competitive labour force in SVG, fill gaps identified by the Labour Demand Survey, decrease unemployment among Vincentian youths and contribute to the improvement of the socio-economic status of the citizens of SVG.”

In the Budget Debate last week, Opposition Leader Godwin Friday noted that Gonsalves had said that unlike the Youth Empowerment Service (YES) and the Supportive Education and Training (SET) programmes, which place intern in the public sector, ON-SITE will place them in the private sector.

Friday said that the NDP criticised the YES programme for paying workers below minimum wage.

“Secondly, we said that the programme can be expanded to move it from just simply in the Public Service, where you have so many people on the programme, they had them sitting around doing nothing because they really don’t have much for them to do — a waste of their resources and demoralising for the students involved,” the opposition leader said.

He said his party’s proposal was to place the interns in the private sector.

Friday added that while Gonsalves did not give details about ON-SITE in his Budget Address, the NDP’s proposal was that the private sector employer at least matches what the government pays the interns.

“We say, we will work with the private sector looking to expand by offering incentives to them to take on your workers including subsidising their wages, and this is under the YES programme. By doing this, we can raise the monthly stipend of YES workers to EC$650,” Friday told Parliament.

“And we have, in our programme, suggested that the private employers would then have the opportunity to train these people to see if they can stay on as really skilled and useful employees and give them a chance to have broader experience and they can move from different sectors…”

Wrapping up the Budget Debate last Thursday, Gonsalves told Parliament that the first phase of NDP opportunism is to describe as a lie or an election gimmick a policy or programme announced by the government

“When the election passes, and the project or the programme is continuing, you can no longer say it’s an election gimmick,” Gonsalves said.

He said the NDP then claims that only supporters of the Unity Labour Party are benefitting and NDP supporters are being victimised.

“Phase three, ‘We need more accountability and transparency on this programme,” Gonsalves said, adding, “That’s when he noticed the shift begins…

“And by phase four, you’re usually into the next election cycle and the programme is popular. And they can’t cut it because it’s now a popular programme. That’s when they say we supported that programme from the beginning. And if we are elected, we will continue that programme.”

The finance minister said that for the NDP, YES Programme “went from the ‘Youth Exploitation Service’ to being in their manifesto as something that they will continue.

“That is the arc of opportunism. Is a lie, is a gimmick; is victimisation; you need accountability; we will continue it.

“And then you get to stage five, the final phase of NDP opportunism: ‘It was our idea all along’,” Gonsalves said.

“The YES programme, apparently, they started it. That’s what I heard this week. The hospital was their idea… ON-SITE is their idea.”

Online applications will also be facilitated, the ministry said, but gave no details about how to do so. The deadline for submission of applications and supporting documents is this Friday, Jan. 20.

The ON-SITE programme will be implemented by the Economic Planning Division (within the Ministry of Finance, Economic Planning and Information Technology), with oversight functions performed by a steering committee.

The steering committee will be composed of representatives from key stakeholder ministries/agencies, which include the Economic Planning Division, SVG Chamber of Commerce, Invest SVG, the Department of Labour, the Ministry of Education and National Reconciliation, the SVG Community College and the Ministry of National Mobilisation.