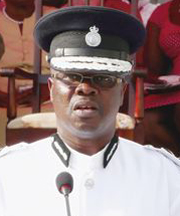 KINGSTOWN, St. Vincent – As more cops go afoul of the law, Commissioner of Police Keith Miller has an answer regarding who will guard the guards: the citizens will.

Miller, speaking at the opening of the Georgetown Police Station on Tuesday, said that citizens would keep police officers in check.

The top cop’s comments was in response to a newspaper editorial which noted that over the past few weeks several cops have appeared in court charged with crimes such theft and rape of a minor, including in instances where these offences allegedly occurred at a police station.

Miller appealed to Georgetown residents to help the police to ensure that their town is safe and encouraged the youth to join the police youth clubs.

He further said that farmers were resisting the formation of a farmers’ watch group to combat predial larceny.

Miller further said that the mountains of the North Windward area continues to attract criminals from St. Lucia and that the Police Force was moving to convert an old school at Fancy into a police station.

The Force was also considering setting up a police station in Mayreau in the Southern Grenadines to combat crime against yachtsmen.

He further announced that the police were making efforts to have some yachtsmen return to the country to testify against three men arrested and charged in connection with a spate of crime in the Southern Grenadines.