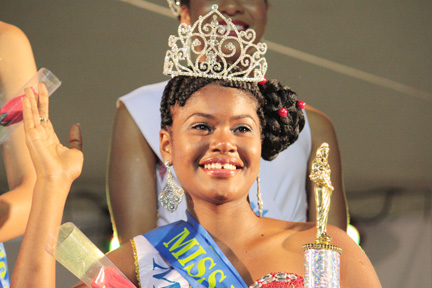 ASHTON, Union Is., April 1, IWN — Miss Mayreau, Justlyn Ollivierre, 18, got her best birthday gift yet when she was crowned Miss Easterval 2013 Monday morning — her birthday.

In winning the title, Ollivierre successfully took the first step in a journey along the pathway that her older sister, Casynella, walked when she won the Miss SVG and Miss Carival titles in 2005.

Results at a glace

As the judges announced that Ollivierre had defeated the other seven contestants in the pageant, her fans began singing happy birthday.

One of them moved forward and handed her a sheet of tissue, which Ollivierre used to dry the tears that had begun to flow when it was announced that the had won the Swimwear category.

One of Ollivierre’s fans encouraged her not to cry. “You have not won as yet,” the female fan said, even as it was announced that Ollivierre had also topped the Talent segment.

But, Justlyn’s domination of the Swimwear and Talent categories, along with her outstanding performance overall, won her the crown.

She was then free to cry, having won the show that she waited all her life to compete in.

“I am feeling really ecstatic. It shocked me, because I never expected this,” the St. Joseph’s Convent Kingstown graduate told reporters after her crowning.

“I only came to have fun. This is my first pageant. I have never been on stage, so this shocked my whole world. Today is my birthday and this is the best birthday gift I have ever had,” she further said.

Ollivierre said she took a break before going to college so that she could enter the show.

“I took a break just for this pageant before I go to college, because I was planning to go to this pageant all my life.”

She, however, said preparation was “hectic, it was rough”.

“I lost a lot of weight and I couldn’t believe I won. It shocked me,” she said.

Some patrons at the show were undoubtedly beginning to think that the monologues in the Talent segment were becoming more than little monotonous.

Four of the six contestant before Ollivierre did monologues on the effects of drug abuse, the death of a mother, how Easterval has changed, and of a child overcoming hardships, respectively.

Many of them fell short on content and delivery.

And while Ollivierre’s monologue — “The Vendor”, was not perfect, she humorously but effectively addressed some of the issue that vendors and tourists in Mayreau encounter during their interactions with each other.

Ollivierre said in the post show interview that she wanted to portray the “good and bad of tourism that affect my little island of Mayreau.”

Ollivierre’s closest rivals in the Talent category were most likely Miss Venezuela, Mariam Barbar, who sang a song that she had written and arranged, and Miss Barbados, who danced.

And, with Ollivierre’s confidence boosted by the win, she is considering entering a pageant in Petite Martinique next month.

“This has given me the confidence to go and enter and big up my little island of Mayreau.”

When she starts college in September, Ollivierre will be studying business.

“Seeing that I come from the very small island of Mayreau, people don’t know about Mayreau and life there is very hard, economically too. So that is why I chose the business field to go in to give back to my community,” Ollivierre said.

Saturday’s show was affected by poor and often erroneous Spanish-English translation, an almost two-hour late start, and a lack of guest artiste, which resulted in DJ music being played between appearances by the contestants.

Correction: An earlier version of this story displayed an incorrect photograph of the Best Evening Wear and incorrectly identified the winner. The correct information is now displayed.
12.666667-61.25