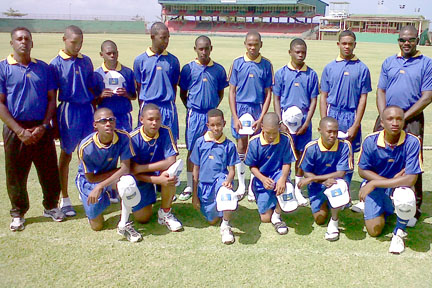 Dominica had their 100 per cent record brought to a grinding halt by St. Lucia (shown).

Dominica ended the 2013 Windward Islands Under-13 cricket tournament as champions but had their 100 per cent record brought to a grinding halt by St. Lucia, who trounced them by 98 runs on the final day of action at Arnos Vale Two.

The St. Lucians, who won the toss and decided to bat, took control of the match with a century opening stand between Dane Edwards and Jervel Tobiere.

Edwards hit an even 50, which included 5 fours and 2 sixes, while Tobiere got 37 as the pair added 103 for the first wicket.

The St. Lucians’ total was also helped by Denzil James, who made 41 with 3 fours and a hefty 48 from extras — 37 of these wides.

Dominica, who were almost caught out chasing 151 against St. Vincent and the Grenadines on Tuesday, could not get the attention of the gods of fortune a second time around and crashed to 129 in the 30th over to lose by 98 runs.

This was not the thinking after Gamliel Ophar (15) and Terrel Toussaint (14) had combined to put 33 on the board before the fall of the first wicket.

They were pegged back and this resulted in them losing 4 for 12. They were given some hope when Tahj Tavernier — 26 and Athanaze – 16, added a further 33 for the fifth wicket.

But the St. Lucians were not about to let their good position slip and piloted by the bowlers they held fast to create a major upset.