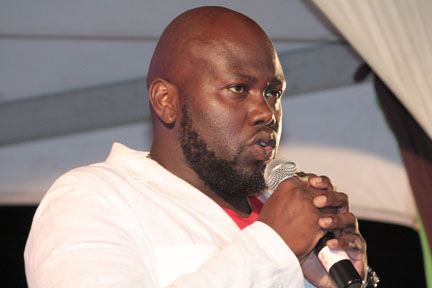 Adbon Whyte says he is fed up waiting for a coroner’s inquest into the death of his father, Customs guard Othneil Money-Man Whyte, who died on June 3, 2012.

KINGSTOWN, St. Vincent, April 11, IWN – A son of the Customs guard who died in the Union Island incident on June 3, 2012 says he is fed up of waiting for a coroner’s inquest to begin.

Police say that Customs guard Othneil “Money-Man” Whyte drowned during the incident in which Venezuelans aboard a boat reportedly opened fire on Whyte and a local police officer.

Three Venezuelans were shot and killed and another was injured during the incident.

On September 19, 2012, Director of Public Prosecution (DPP), Colin Williams, ended attempted murder and attempted kidnapping charges against four of the Venezuelans, in addition to Customs violation charges against the captain of their vessel — “El Amigo Fay”.

But the Customs guard’s son, Abdon Whyte, said on radio Wednesday night that he is “getting fed up now.

“I have reached to the point where you just don’t care … I can’t understand what’s going on. You see people commit crimes everyday or on a weekly basis, or however you want to look at it and locals, they go to court. Some of them end up in jail; some of them are freed. You want to tell me, up to this moment, a coroner’s inquest cannot start,” Whyte said.

He said the DPP was reckless in his decision to discontinue the charges against the Venezuelans “before you know exactly how my father died.

“If the coroner’s inquest is held and it is shown that the Venezuelans are responsible, what happens there?” Whyte stated.

He said he believes the coroner’s inquest is taking so long “because we are poor. “We are poor; we are just a small family from Union Island.”

He said that he is planning to write a number of articles.

“The first one will be this issue with my father and the fact that we are nearing close to a year (since his death) and we are planning a candlelight vigil and march on June 3.

“We would love to get all the support that is necessary to bring an end to this situation, because it is really getting … out of hand. We want closure for this whole thing…” Whyte said.

He further said that while the Government took responsibility for and paid for his father’s funeral, other monies due to them are outstanding.

“I think all that was received was some overtime that was due. But, as far as I know, a year’s salary was supposed to be paid. That was not done.

“Let us put it this way. Everyone received what they wanted except the family that lost the most. The police officer was promoted, the Venezuelan was released and sent back home,” Whyte said.

“I don’t want to say it’s because we are so far down in the Grenadines … I hope this is not a true reflection of how persons are threated by our justice system. And I am hoping and I am appealing to the DPP and to the Prime Minister (Dr. Ralph Gonsalves), he is the Minister of Legal Affairs…” Whyte further stated.

“My main focus right now — and that is my only focus — is looking out for my family and getting some closure into exactly what happened to my father on that fateful night,” he further said.