Fight between woman and college girl ‘over man’ turns bloody 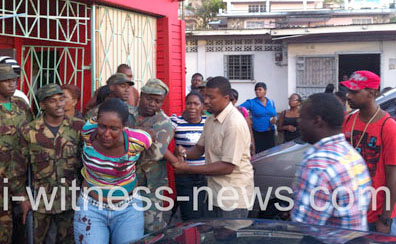 Detective Constable Hadley Ballantyne handcuff a woman as she is led out of Stoplight Restaurant, where she was involved in a fight with a Community College student on Thursday, April 11, 2013.

KINGSTOWN, St. Vincent, April 12, IWN – A fight — reportedly over a man — between a woman and a female Community College student in uniform near the Peace Memorial Hall on Thursday, spilled into the kitchen of a nearby restaurant, where the woman received a blow that left her with a bloody face.

Heavily armed, uniformed police officers, along with plain-clothes detectives, later handcuffed and took away the woman, who screamed obscenities at them and resisted as she was placed inside a marked police vehicle.

The student left the scene in an unmarked car, but it was not immediately clear if the driver, or any of the persons accompanying her, were police officers.

A large crowd had gathered as the commotion developed and unfolded.

I-Witness News saw a video clip of the beginning of the fight, where the woman and the students exchanged blows before wrestling each other to the ground.

The full-bodied student, who was then on top of the woman, continued to deliver blows.

When I-Witness News arrived on the scene around 5:40 p.m., the student, was not to be seen, but the woman was outside the restaurant cussing about having bought a van for an unidentified man.

The woman complained about the man having relationships with other women.

Sometime later, a marked police vehicle containing several officers in Special Services Unit garbs and armed with automatic weapons arrived on the scene and escorted the woman out of the restaurant.

She was placed in handcuffs as she refused to go with the police.

A staff member of the restaurant — Stoplight — told I-Witness News that after the fight spilled into the restaurant, the student was told to remain in the kitchen.

The staff member then secretly called the police, who responded more than half hour later.

The woman suddenly rushed into the kitchen and accosted the student and it is believed that the student hit the woman in the head with an object, sending blood streaming down the injured woman’s face and unto her clothes, the staff member said.

“I have never seen something happen so fast,” the staff member told I-Witness News, adding that the woman also bit another staff member on the hand.

The staff member further complained about the amount of time that the police took to respond to the incident, in Kingstown, where Police Headquarters is located.

Had the police responded sooner, the incident would not necessarily have turned to bloodshed, the staff member said.

The staff member also told I-Witness News that she knows personally the man over whom the woman and the student reportedly fought.

“I can’t believe people would fight for a man like that,” she said.

Other persons in the area said that the student denied being involved with the man.

(Editor’s note: We apologize for uploading earlier an unedited version of this story and have attempted to correct the typos.)
12.666667-61.25