Indigenous activist fights to save his tribe and the Amazon rainforest 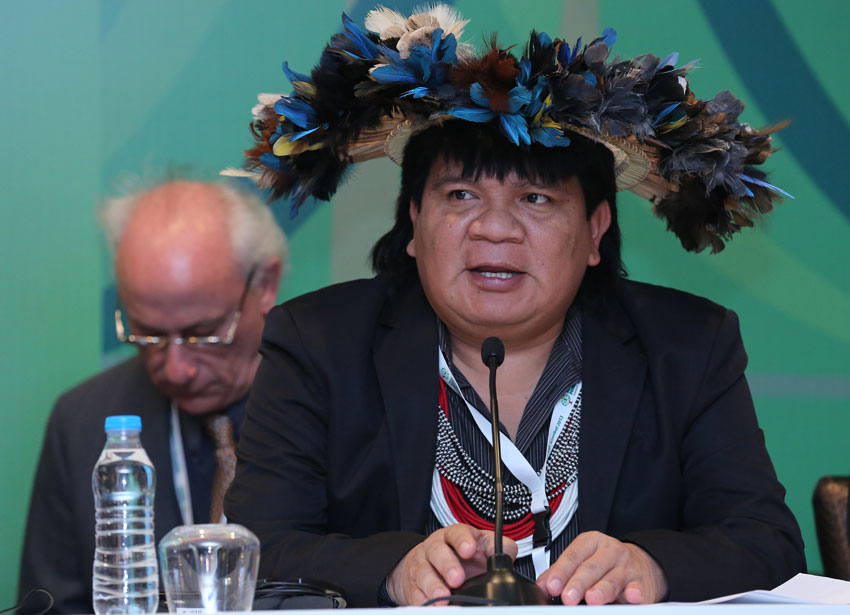 April 18, 2013 — Almir Narayamoga Surui was born into an indigenous Amazonian tribe — the Paiter-Surui — in Rondonia in northwest Brazil at a time when his people had very little contact with the world outside of the forest. He is the first member of the Surui to attend college, and for more than 20 years has been fighting to save both his tribe and the Amazon rainforest.

Surui was one of five people honoured with the Forest Hero Award from the United Nations Forum on Forests, which is currently meeting in Istanbul, Turkey. The award recognizes “unsung heroes” from around the world who are working to sustain, protect and manage forests.

“He has brought his tribe back from the brink of extinction through ingenious and courageous environmental and political activism,” Daniel Shaw of the International Union for Conservation of Nature (IUCN), and a juror for the Forest Hero Awards, said of Surui.

By the time Surui was born in 1974 and his people had some “contact with white people,” his tribe already faced problems with economic exploitation and disease. “My people were reduced from 5,000 people to 295 persons,” he stated.

“Today, for us, it is a real challenge to protect our forests,” he acknowledged, noting that large development projects in the region also bring with them negative social and environmental consequences.

“Nowadays, forests in the Amazon are located inside indigenous lands. In territories that do not belong to indigenous groups, the forests do no exist anymore,” Surui said. “This is the reason why it is so difficult for us to keep the forests and that’s why we are looking for and struggling for a national policy whereby we have the support of the population in terms of utilizing everything sustainably that the forest gives to us.”

After being elected chief of his tribe at the age of 17, Surui successfully lobbied the state government to build schools, wells and medical clinics for the Surui and other tribes in the rainforest. He spearheaded the creation of a 50-year plan, which encompasses large-scale conservation efforts, reforestation projects and activities that offer economic alternatives to exploiting the forest.

During the 1992 U.N. Conference on Environment and Development held in Rio de Janeiro, Brazil, indigenous peoples’ rights to forests was clearly recognized as a crucial component to preserve the environment and solve the global environmental crisis.

However, according to the U.N. Department for Economic and Social Affairs, the process in this regard has been slow, and indigenous peoples continue to lobby governments for the full legal recognition of their traditional land rights.

In fact, in many countries, indigenous peoples lack any legal title to their land, and in other instances, even if they count on a title, governments can revoke it at any time.

The U.N. Declaration on the Rights of Indigenous Peoples provides a framework for indigenous peoples’ rights to forests and recognizes the right to make decisions and to be involved in the decision making process. Indigenous peoples have a right to give or withhold their free, prior and informed consent on activities that may affect their lands, territories and livelihoods.

The U.N. Special Rapporteur on the rights of indigenous peoples, James Anaya, has warned that the extraction of natural resources and other major development projects in or near the territories of indigenous peoples is one of the most significant sources of abuse of their human rights worldwide.

“In its prevailing form, the model for advancing with natural resource extraction within the territories of indigenous peoples appears to run counter to the self-determination of indigenous peoples in the political, social and economic spheres,” he told a session of the U.N. Human Rights Council in Geneva, in one of his reports.

The efforts of his tribe to protect the forests have not been without costs, Surui said. Last year, the lives of 12 Surui leaders were threatened. Today, there are seven leaders who are the subject to threats and are under the protection of the police and representatives of the Government’s human rights office.

He said the basic struggle is how to recognize the value of forests and how forests contribute to the continuity of human life.

“My people, the Surui, have a very close relationship with the forest. We are born in the forest; the forest is everything to us. The forest teaches us things, gives us our food and medicines. It supplies materials for our spiritual life. All of these things, the forest offers to us, it is part of our lives,” he said.

Among his many achievements, Surui convinced the World Bank to re-structure a regional development programme to better benefit local indigenous groups. He is hoping to generate income for the Paiter-Surui by selling forest carbon credits. To achieve this goal, he convinced technology giant Google to help the tribe use digital technology to monitor and map the forest.

With Google Earth technology, the Paiter-Surui tribe is now able to monitor its forests and report on illegal logging activity on the edges of its territory.

“It’s a real challenge for us to keep our forest as it once was,” Surui said.

“I’m not saying that the forests should remain untouched. What I am saying is that forests must be respected, admired and used in a way that enables us to be able to continue having a relationship with them.”