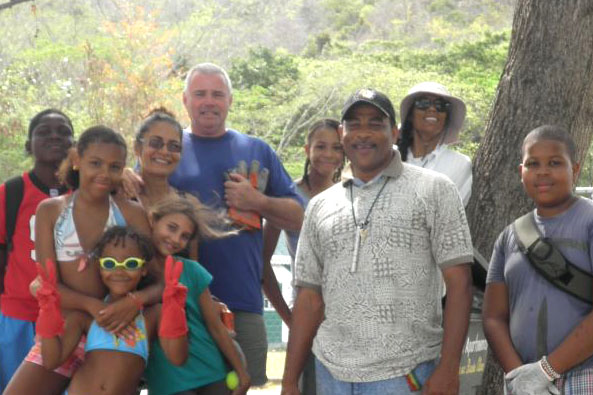 Members of the Shotokan Karate Club after they cleaned up Lower Bay Beach, Bequia.

KINGSTOWN, St. Vincent, April 27, IWN – Members of the Shotokan Karate Club cleaned up  Lower Bay Beach, Bequia on April 20, collecting garbage and bottles in the bid to raise some much needed funds, which was donated by Action Bequia.

Action Bequia offered EC$1,000 towards the fundraising in return for the clean up. Other funds were also donated when the Kiai Shotokan Karate School held a demonstration event showing some of the skills that the members had learnt under the instruction of Sensei Gibson.

The Kiai Shotokan Karate School was started in 2006 by Sensei Selwyn Gibson who is a third degree black belt in Shotkan Karate, with over 30 years’ experience. Gibson has made history in Bequia by raising the first generation of black belt holders with a group of school-aged brown belts soon to follow.

Members of the club, range from 5 years old to 55 years old. A large group of the students are of school age.

Kiai Shotokan Karate School is also holding a Moonlight Training Session on Friendship Beach today — Saturday April 27, with a barbeque and refreshments and is hoping to gain more sponsorship on that day.

Karate is more than an impressive physical system. It is a valuable philosophy, teaching discipline, self-defence, strength of body and mind. Karate teaches both adults and children to think for themselves on their feet, particularly in times of crisis and overwhelming stress.