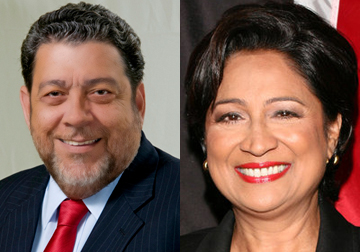 KINGSTOWN, St. Vincent, May 30, IWN – Prime Minister Dr. Ralph Gonsalves says he has requested a 90-minute meeting with his Trinidadian counterpart, Kamla Persad Bissessar, next month at the Heads of Government meeting to discuss the Caribbean Air Navigation and Advisory Services (CANAS) and regional airline LIAT.

He said that when I was in Trinidad and Tobago on Tuesday he spoke to the Trinidadian leader.

“I suggested to her that when we have the Heads of Government meeting in July, I asked her if she could put aside about 90 minutes that we can talk,” Gonsalves told the 43rd Special Meeting of the Council for Trade and Economic Development (COTED) on Wednesday.

Gonsalves said the talks will be “at a political level” because the Organisation of Eastern Caribbean States (OECS) have mandated him to talk to Port-of-Spain about the operations of CANAS and shareholder governments of LIAT have empowered him to speak to Trinidad and Tobago on those issues.

He further said that Barbados has also authorized him to speak on their behalf “on the issue of the airspace”.

“It is a simple issue of accounting and transparency. I don’t see there can be any quarrel about that. And LIAT has raised the issue in relation to fuel subsidies. It is not only in relation to LIAT; there are other knock-on effects with other airlines outside of the region.”

“And the Prime Minister said when we are meeting, the technical people can be meeting and then we join them at some point,” Gonsalves said in reference to Persad Bissessar’s response to his request.

One reply on “Gonsalves wants 90-minute talk with Trinidad leader”