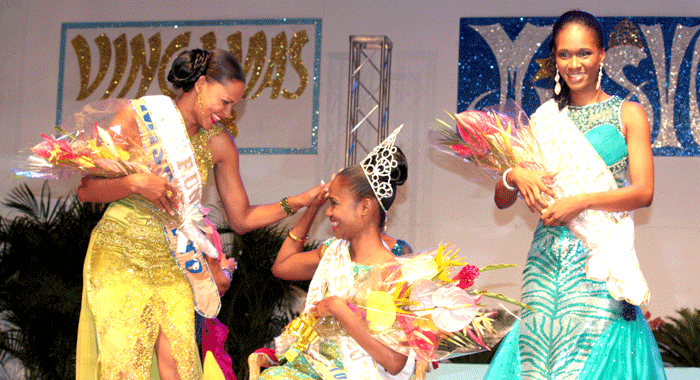 Shara George, Saturday night, defeated seven other contestants in a rain-touched show at Victoria Park that some patrons described as unnecessarily long and at times bland, to emerge Miss SVG 2013.

The result, as is often the case with beauty pageants, seemed to have left even George herself surprised.

When she was announced as the winner, the 22-year-old Cane Garden resident took what appeared to be a few seconds before reacting.

She then posed with both index fingers pointed in the air and her mouth agape before stepping forward to be crowned.

“It’s what happens when, yes, you have been working towards something, but you can’t actually believe that that thing which you’ve been working so hard for has actually happened to you. That’s what my expression was about,” she said of her reaction in a post-show interview.

“Words cannot express this feeling after such a long journey. Sleepless nights, long days balancing work and training; it’s absolutely amazing,” she said of her victory.

With her victory, George, who is pursuing a bachelor’s degree in business management, specializing in marketing, also won a three-year, EC$80,000 scholarship tenable at the University of the West Indies, EC$8,000 in cash, and other prizes.

She will also represent this country at Miss Carival on June 28.

“I will certainly be stepping my game up, because now I am representing St. Vincent and the Grenadines, not just my sponsors. So I will be putting my best foot forward for Miss Carival. I have to defend my home turf,” she said after her crowning Sunday morning.

The other contestants also voted Laborde, a Hopewell resident, who was sponsored by Metrocint General Insurance Co. Ltd., as Miss Congeniality.

Second Runner-up, Hannah Hamilton of Dorsetshire Hill, who was sponsored by Lotto, did not top any of the categories of the show.

Chenead Hackshaw, Miss Super 6, won the Talent category of the show with “Poortee”, a hilarious dramatization of herself as a Vincentian deported from Canada after making a fraudulent claim for refugee status there.

Hackshaw unlike some of the other contestants, executed well the piece that was at the same time creative, topical, and entertaining — elements that always seem to resonate well with the judges and even more so with patrons.

Also, unlike some of the other contestants, the Spring Village resident, was the sole point of focus during her talent performance as she had no supporting actors and very few props.

But George might have also been a strong contender in this segment of the show also, with her piece “A Caribbean Woman’s Quest”, which paid tribute, in calypso to the peoples of the Caribbean.

She transitioned smoothly between songs as she sang David Rudder’s “Calypso”, Grantley “Ipa” Constance’s “One Caribbean Nation”, and, among other renditions, Rudder’s “Rally Round the West Indies”, during which some former players from the regional team appeared on stage in their team uniform.

But a video clip at the beginning of Laborde’s performance might have cost her some points and maybe the category. The clip was of her aboard an aircraft welcoming visitors to St. Vincent and the Grenadines and was played after the intro to Rudder’s “Calypso” had already hyped patrons.

In the first question, George was asked about her passion for children and starting a foundation to aid the disadvantaged among them.

“I have always had a passion for children. I believe that being educated is the way out of poverty and therefore my project will be to start a foundation to assist children who are attending school but are unable to afford the resources to attend school.”

She was asked what she thinks is the purpose of a job interview.