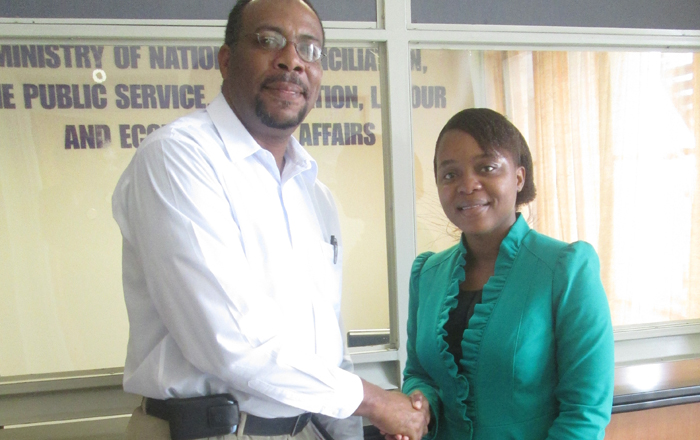 Leader of the Democratic Republican Party (DRP), Anesia Baptiste, met with the National Reconciliation Advisory Committee (NRAC) on May 27.

The NRAC requested the meeting as part of its “efforts to fulfill its mandate … to discuss the party’s role in the national reconciliation process”.

The NRAC was represented by its chair, Pastor Stephen Ollivierre, and the organization’s secretary.

The NRAC also called upon the DRP to support its national reconciliation efforts by asking it supporters to be responsible citizens, especially while in political campaigning, and to remember that we are one people, a DRP release said.

Baptiste gave the DRP’s full support to the objectives of the NRAC, highlighting the party’s founding philosophy of respect for the inalienable rights and freedoms of all Vincentians, as proof of its commitment to the process of national reconciliation.

Baptiste explained that the DRP believes that political and other division is fundamentally as a result of the fact that all Vincentians need to realize that they are all equally created by God with rights and freedoms which must be respected, regardless of political and other differences.

Baptiste also spoke of the problem of political victimization as negatively affecting reconciliation efforts in the country and encouraged the NRAC to ensure that it speaks consistently and fairly in all its efforts, in order to build public confidence in its work.

Cabinet appointed the NRAC in March 2012 and tasked it with spearheading this country’s reconciliation agenda.

The committee works in conjunction with the Ministry of National Reconciliation and is comprised of various stakeholders including SVG Christian Council, National Committee on Crime Prevention (NCCP) and National youth Council (NYC).

The main objectives of the NRAC are:

The DRP is the newest political party in SVG. It was announced on August 24, 2012 by founder Anesia Baptiste as the alternative political party for government in St. Vincent and the Grenadines.

One reply on “DRP meets with national reconciliation advisory group”