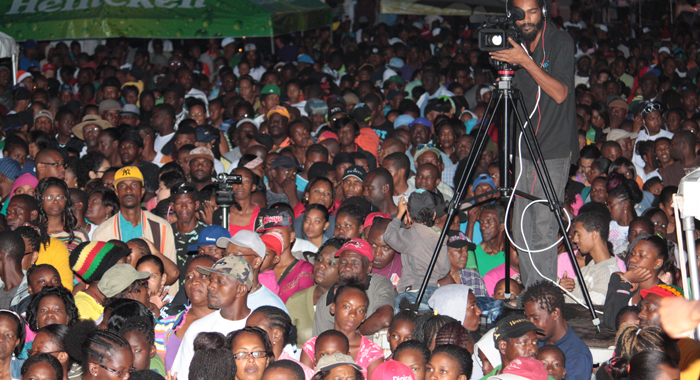 Thousands of persons at Nine Mornings in Kingstown in 2012. (IWN photo)

Nine Mornings is a unique Vincentian festivity associated with the Christmas season. Nine Mornings before Christmas, Vincentians awake in the early hours of the morning and part take in a range of activities, among them sea baths, dances (or in local parlance, fetes), bicycle riding and street concerts. In the rural areas, the final morning of the festivity usually ended with a steel band “jump-up”.

The origins of this festivity are clouded in some mystery, although the oral tradition relates it to the “novena” of the Catholic Church on the nine days before Christmas. It is believed that after the early morning church services of the Catholics, worshippers began walking the streets while others went for sea baths. From this the popular festivity emerged. Although popular opinion has this practice as starting during the period of slavery, it was more likely to have been a post-emancipation practice.

It is also believed that something around 1913, a Vincentian member of the Dominican Order of the Catholic Church initiated a tradition of celebrating a Christmas novena in the early hours of the morning. It was the procession home after the service, as the churchgoers wandered back to their houses, eagerly greeting friends with holiday blessings and peering in the still-shut shop windows, which developed into today’s celebration. Soon it became customary for the “boom drum” bands, composed of musician playing goatskin drums and wooden flutes, to accompany the walkers home. Street dancing, of course, was soon to follow, and in time, the character of the Nine Mornings’ celebration changed. Over the years the number of walkers grew, and with the advent of the steel drum band a carnival-style Nine Mornings tradition evolved. Street vendors joined the celebration, selling drinks made from ginger and sorrel as well as holiday cakes and sweets. A later addition was the tradition of the “carollers” who went house-to-house singing Christmas carols.

Nine Mornings was particularly popular with young people for whom the normal restrictions at home were relaxed, giving them an opportunity to socialize with their friends. At different periods emphasis was placed on different activities. In the early period, street walking and sea bathing seemed to have predominated. Over the years other features took root. In Kingstown, owners of bicycles decorated their bicycles with lights and rode around town. Person wanting to get hot bread besieged bakeries around town that were producing bread for the early morning market. Over time the bakeries catered to this demand. Dances became popular at other times and recently in Kingstown, concerts involving choirs and individual entertainers have been attracting large crowds. There are also fun competitions such as speech making, beer drinking and banana eating, crying, laughing, ‘ring play’ games and story telling. A welcomed addition in recent years is the ‘lighting up’ of towns, villages, commercial buildings, churches and private homes.

The organized activities which have been run by the SVG Nine Mornings Committee since 1999, are relatively new since the traditional practices were totally spontaneous and unorganized. This Nine Mornings practice is entirely unique to St. Vincent and the Grenadines and provides an opportunity for Vincentians to boast about something, which is special to them. The business sector has always been concerned about the impact of these activities on the productivity of their workers, some of whom on occasions go through the night, or, in local parlance, “round the clock”, moving from the late night entertainment spots to the Nine Mornings entertainment. They have however, recognized that it is a well-established cultural practice that is deeply rooted.

The festival has been transformed from what it was decades ago — early morning sea bathing, fetes and street parades to sound of steelbands, tin cups, goat skins and boom drums, to modern day early morning street concerts, community lighting and carolling contests. Much emphasis is placed on audience participation in fun events. From Vincentian nationals competing in trivia contests on cultural and historical information about St. Vincent and the Grenadines, to visitors volunteering aspects of their culture, to physical and talent challenges for kids and adults, combine to make the festival appealing to all ages. Added to this is the variety of performances that compliment the morning’s program. There are steelbands, gospel bands, dance groups, dramatists, choirs, soloists and singing groups.

Impressively there are activities spread right across mainland St. Vincent and in the Grenadines as well with close to 52 communities involved. From Rose Bank and Troumaca on the leeward side known for boom drum and quadrille dancing; to Richland Park and Carriere in the Mesopotamia valley where every morning brings a different variety of “bush tea”; to Park Hill and Greiggs on the windward side for a spicy creole evening; to Point Village and Owia above the Dry River for ring games and storytelling; to Stubbs mock hangings and drama; to Mt. Pleasant and La Pompe in Bequia to see ‘light up’; to Union island by the seaside, there is never dull moment.

There are several community competitions which have been organized to encourage greater participation that have engendered friendly rivalries amongst the various villages. In 2012, the tiny village of Town Hill won the Community Lighting competition; Stubbs was awarded Best Nine Mornings Community and Carriere Best Christmas Community; Arnos Gardens the Best Lit Garden. Roland “Rolly” Bowman won the award for the Best Local Christmas Song organized to encourage local artistes to produce music for the festival.

The potential of the festival of being the flagship for our ever-growing tourism industry has been recognized. We are now in a position where we can market and package the festivity for the world to share. In fact the month of December has surpassed the carnival month of July in terms of visitor arrivals. International recognition came as the popular American television Travel Channel voted St. Vincent and the Grenadines’ Nine Mornings festivity as one of the best Christmas celebrations in the world during its one hour long program entitled “Christmas Fun in the Sun” aired in 2006.

2013 will mark the 100th anniversary of the festival and the festivities are expected to be at a higher level with a special lighted street parade featuring traditional music, characters and flambeau at the launching on December 1st. Activities will continue throughout the month across the country with various carolling contests, special shows, concerts, exhibitions, community lighting and climaxing December 16 to 24 with the Nine Mornings festivities from 4.00 am daily!