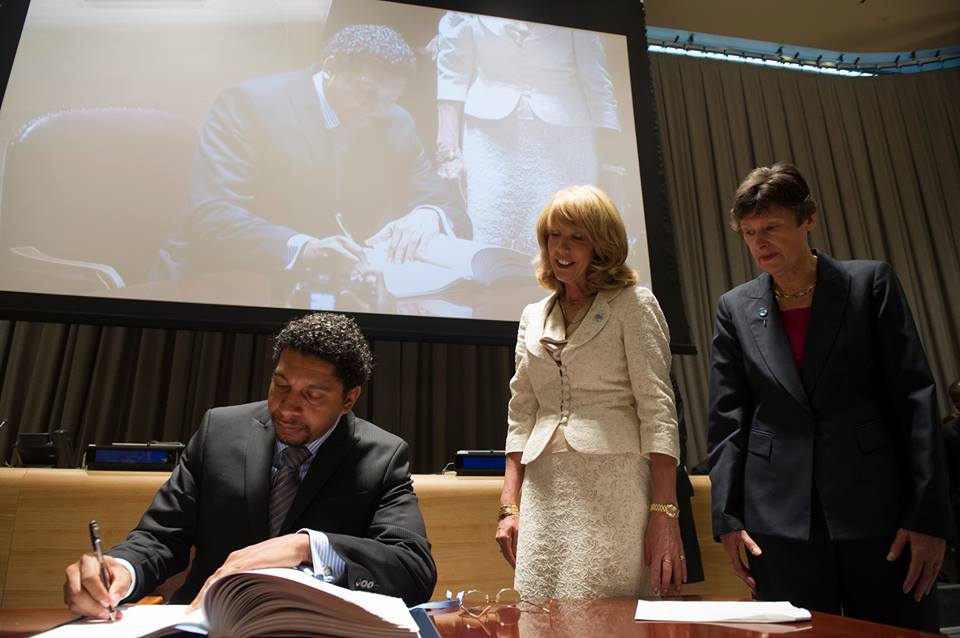 St. Vincent and the Grenadines was among 67 countries that signed the world’s first treaty to regulate the international arms trade on the first day that it open for signature at the United Nations in New York on Monday.

This country’s ambassador to the United Nations, Camillo Gonsalves, signed the U.N. Arms Trade Treaty (ATT) on the day that U.N. Secretary-General, Ban Ki-moon, stressed that through the ATT, countries have an historic opportunity to eliminate excessive and poorly regulated weapons transfers.

The singing comes two months after the overwhelming majority of U.N. members, including SVG, voted in favour of the treaty.

This country voted in favour even as it said it was disappointed by the lack of robust regulations governing ammunition and specific references to the trade in guns by drug-traffickers.

The treaty was subjected to a vote after the Conference of States negotiating it failed to come to unanimous consensus agreement on the precise language of the document.

At the vote, 154 voted in favour, 23 abstained and 3 countries opposed the treaty. SVG was one of the 64 states that co-sponsored the resolution that adopted the treaty.

The treaty is designed to set standards for all international transfers of conventional weapons and small arms.

It would also create binding requirements for countries to review all international arms contracts to ensure that arms will not be used in human rights abuses, terrorism or violations of humanitarian law.

“However, the treaty is far from perfect and reflects a number of compromises among the divergent views of countries,” Ambassador Gonsalves said in a press statement after the vote in April.

He said many countries complained that the treaty favours countries that manufacture and export weapons, while it is slanted against arms importers.

Other states, he further said, noted that the treaty did not include strengthened provisions against terrorist groups, as many countries had sought.

Similarly, many states wondered how liberation movements or parties to a civil war would be treated under the treaty, and questioned the inclusion of vague language on humanitarian criteria, which could be used selectively to deny arms transfers intended for legitimate government purposes.

“Nonetheless, the treaty represents a strong step forward in the efforts to regulate the transfer of guns and weapons, since there was no legally-binding framework in place prior to the U.N. vote.

“All CARICOM states enthusiastically supported the adoption of an Arms Trade Treaty, despite some misgivings regarding the scope, strength and specificity of the final document,” Gonsalves said in the press statement.

He noted that SVG has been one of CARICOM’s leading voices in advocacy for the Arms Trade Treaty, with Prime Minister Dr. Ralph using his 2008 address to the U.N. and his 2008 Independence Address to the nation to speak on the issue.

Meanwhile, at a special event marking the Treaty’s opening for signature on Monday, Secretary-General Ban Ki-moon:

“With the ATT, the world has decided to finally put an end to the ‘free-for-all’ nature of international weapons transfers…

“The ATT is substantive and robust, but its effectiveness will depend on the willingness of states to ensure its full implementation,” the U.N. chief further said.

He further appealed to major arms-trading countries in particular to be “first movers” and bring their national legislation in line with the requirements of the treaty, which will come into force 90 days after it has been ratified by 50 nations.