Too much emphasis on theatrics in Soca Monarch — Fya Empress 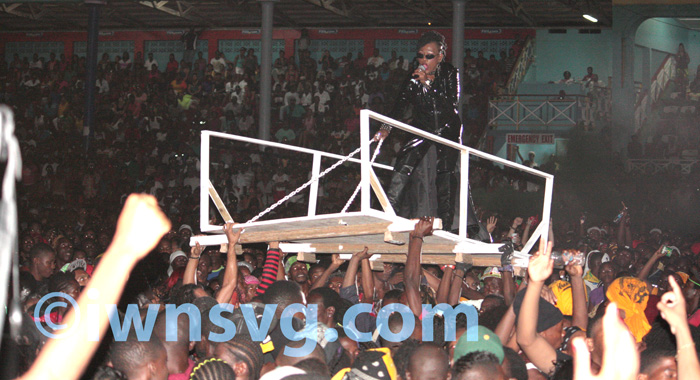 Fya Empress is carried above head as she begins her performance at Soca Monarch on Saturday, July 6, 2013.

Lornette “Fya Empress” Nedd-Reid says that as an artiste who likes to sing, she thinks there is too much emphasis on theatrics in the Soca Monarch competition.

She says she also feels pressured to get involved in the theatrics, but her attempts have been rebuffed by the Carnival Development Corporation (CDC).

Skinny had a helicopter from St. Lucia fly over then land at Victoria Park at the beginning of his performance, hyping the crowd.

But Empress said that while she had many things planned, her performance had to be redesigned because of restriction by the Carnival Development Corporation.

“This year, we had so many things planned and everything crushed within weeks,” she told I-Witness News after the Soca Monarch show

“As much as this week (the week before the show), we had to crush every one of the presentations we had and do it over and it was very stressful.

“We wanted to skyline from that roof you are seeing (the pavilion) there straight to the stage. Not something hovering and [patrons] can’t see where the person is coming from. It would have landed on the stage so you would have known, yes Fya Empress didn’t put somebody there, because she came,” the artiste further told I-Witness News.

“They said, no, we can’t do it because we can’t weld anything to there so that means that that whole park needs to relocate soca monarch because it [limits] your presentation and I was very sad about it because I wanted to show woman power tonight and I couldn’t,” the artiste further said.

The thousands of patrons at the show cleared a pathway as Empress was carried above head on a platform towards the stage.

Asked if she thinks there is too much emphasis on theatrics, Empress said:

“Yes. I love to sing. I was given a long list of pin pointers on what I should do and one of them was you need to come with a song for the people and that means dialect, and I am thinking that we have a road that we want to go and we have a vision.

“And if I have to leave from up there and come down there because you think that the people won’t understand, I can’t do that. But let’s hope that they get it soon,” she said.

She further said that while she feels pressured to get involved in the theatrics, she is being limited.

“Things you want to get, you can’t get but you are seeing it being done with others. It hurts. But what can you do? But, I’ll be back next year again,” she further stated.