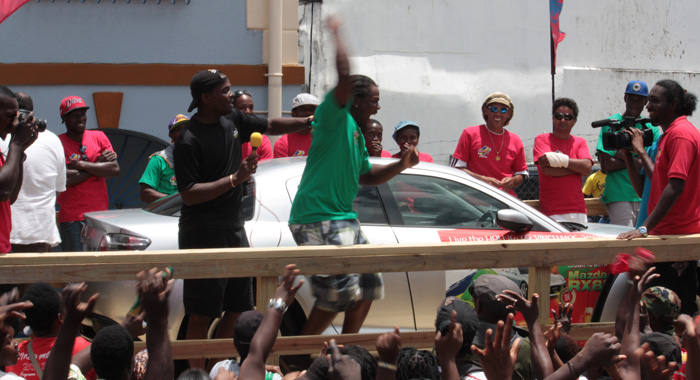 Carlisle Burke reacts after the key he picked during the luck draw opens the Mazda RX-8, making he cars his. (IWN photo)

A 41-year-old construction worker of Chester Cottage is the winner of the Mazda RX-8 in the Hairoun Hai Life Promotion.

Carlisle Burke was among the 11 persons who was still holding onto the EC$67,000 car shortly after 11 a.m. Saturday, 24 hours after the competition started at Heritage Square, Kingstown.

Nine of the competitors had already dropped out.

And even after the 24 hours had elapsed, the tension continued as the 11 competitors each had to pick two keys.

Burke picked the key that unlocked the door to the car and became the winner.

“It was a fight. I am a hard working guy and I just love this moment. Thanks, Hairoun. Love yuh,” Burke told the crowd at Heritage Square after unlocking the car.

He said while the competition was “a bit of a challenge”, his experience as a construction worker helped.

“I do concrete in Canouan everyday and I know what hard work is. I know you can’t eat too much of food, so I had two Lucozades in the morning. That really, really gave me energy to go on. It’s faith and the power of God,” said Burke.

Burke said that he never felt like giving up during the competition.

“I always had somebody passing and saying go on. I knew I could do it.”

Burke was the 10th person to try his key.

He explained the experience when he inserted the key into the door of the car and the lock turned.

“It was the best feeling. … I just felt so good. I just felt it was the key. And from the time I put that key in the door and it turned, I was just wow,” he said.

Burke works in Canouan and returned to St. Vincent for the competition.

“I feel good because I have a lot of support in Canouan. They guys said, ‘If you don’t stay that 24 hours and win that car, don’t come back to work’,” he said.

The Mazda is not Burke’s first vehicle. He owns a Toyota Hiace. He said he could not say what he would do with the Mazda.

Burke’s wife, Loretha and one of his children, 6-year-old Ceej Burke, were on hand to celebrate with him.

They sat in the car during the interview and posed for photographs.

Meanwhile, David Browne, a Jamaican who was a judge in the competition, said he thinks Burke deserved to win.

“There are other people who wanted to quit at some point but … he had a positive attitude throughout,” Browne told I-Witness News.

“He said ‘I am going to win this.’ As a judge, I had no issues with him. … He was just straight up right throughout.

“In some cases, I had to ask people to stand a little differently or stop engaging the crowd, but he was disciplined throughout. I had no discrepancy with him,” the judge told I-Witness News.