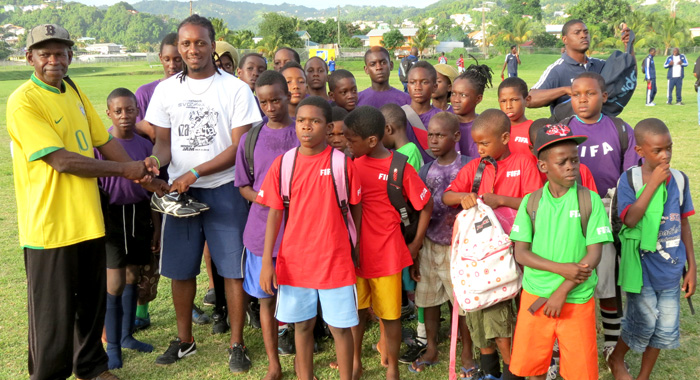 Young footballers in North Leeward are now in a better position to participate in the sporting discipline, following the presentation of football gears from Troumaca resident and community activist, Gideon Lewis.

During the presentation last Sunday, Lewis said the donation was from his sister and her husband in Canada, and hinted at more assistance to come.

He said the major challenge was getting the donation through custom.

He had sought but failed to receive help from various sporting entities and governmental institution and had to use monies his own money to pay the Customs dues.

He is therefore calling on the relevant authorities to make provisions in such cases.

“When you look around, you see parents who can’t afford to buy gears. So I use my connections to assist,” Lewis said.

The community activist has assisting in the past, including with cricket equipment, books for students and Christmas lights to beautify his community.

Besides the Troumaca youth footballers, of which Lewis is the manager, the Chateaubelair/ Fitz Hughes Youth Footballers and the Kenville Horne Sports Academy also benefitted.

Coach of the Chateaubelair/Fitz Hughes Youth Footballers, John Williams, said he was grateful for the donation, and explained that it is the children who will benefit most.

Meanwhile, manager of the Kenville Horne Sports Academy, Kenville Horne, said Lewis does something that many of the major businesses in SVG have been failing to do.

“Am not saying that the businesses in SVG don’t contribute to youth development, but a lot can do better,” Horne said.

Horne said that Lewis must be commended.

“He could have said, ‘Well, I paid Customs to get them here, so I’m going to sell them to get back my money.’ But he didn’t and that is quite noble,” Horne further stated.

Horne explained that the youths in Rose Hall have been at a disadvantage because of the far distance and lack of resources, but said that with the help of people like Gideon Lewis in Troumaca and Orande Ash in Barrouallie “we will correct that”.