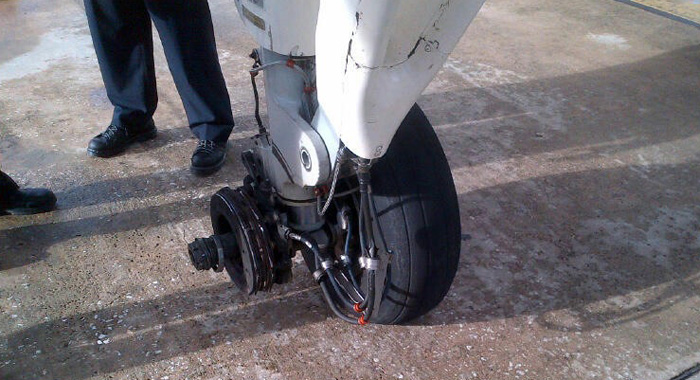 A photo of what LIAT describes as a main wheel failure on one of is aircraft on Monday.

On Monday, LIAT issued a bare bone release saying that one of its aircraft had landed safely in Barbados yesterday after “a main wheel failure during takeoff” in Guyana.

The airline had 43 passengers on board and will undergo the various checks stipulated by the manufacturer before it is returned to service, LIAT said.

The airline did not give any indication of type of aircraft or the nature of “a main wheel failure”.

Since then, we have been able to independently verify the following:

Below is the full text of LIAT’s statement:

ST. JOHN’S, Antigua – The management of LIAT (1974) Limited wishes to inform that LI 774 travelling from Guyana to Barbados this morning, with 43 passengers on board, had a main wheel failure during takeoff.

The aircraft continued to the Grantley Adams International Airport where, as a precautionary measure, emergency services were on standby. The landing was uneventful and the passengers disembarked at the gate in Barbados.

The aircraft is being examined by the company’s maintenance department and will undergo the various checks stipulated by the manufacturer before it is returned to service.