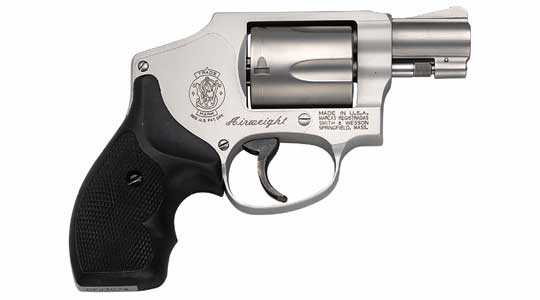 The type of gun the teenager is accused of stealing. (Internet photo)

A 13-year-old student of Ashton, Union Island was on Monday arrested and charged with stealing a gun and four rounds of ammunition.

Police say the student was charged with entering the dwelling house of Anthony George, a 58-year-old businessman of Mesopotamia as a trespasser and with stealing one black Smith and Wesson Airweight .38 Revolver with four rounds of .38 ammunitions.

The student is also charged with stealing EC$470 in cash, the property of Anthony George and at Ashton last Sunday.

Meanwhile, police also say that on Monday a 15-year-old fisherman, also of Ashton, Union Island was charged with possessing without a licence a firearm he knew or believed to have been stolen.

Enard Douglas was arrested and charged with having in his possession one black Smith and Wesson Airweight .38 revolver without a license issued under the Firearm Act.

He was also charged with having in his possession four rounds of .38 ammunitions without a license at Ashton on Sunday.

The teenager was s also charged with knowing or believing one black smith and Wesson Airweight .38 revolver and four rounds of .38 ammunitions to be stolen goods did dishonestly undertook or assisted in its retention of same for his own benefit at Ashton on Sunday.