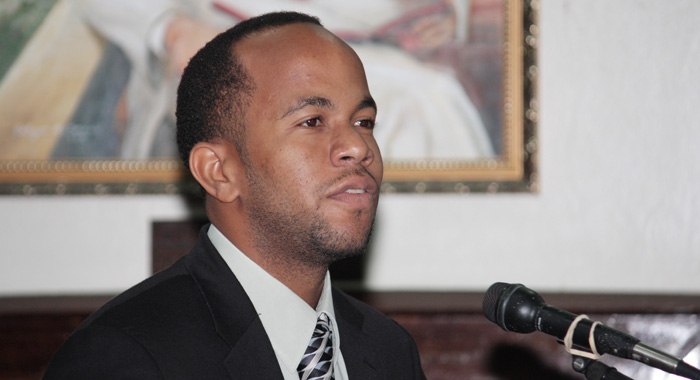 When Luke Browne, then a political neophyte, entered the ring against Leader of the Opposition Arnhim Eustace in East Kingstown in 2010, he, like two others before him, was defeated.

But Browne, now a parliamentary secretary, and senator for the ruling Unity Labour Party, for which he ran in 2013, says he plans to become MP for East Kingstown soon.

Browne was sworn in as a parliamentary secretary and senator for the ruling Unity Labour Party (ULP) last week.

When he delivered his maiden address to Parliament on Thursday, Browne made clear his intentions, as far as electoral politics is concerned.

“In as much as I have heard a lot of two and fro about the prospects associated with the next general elections contest, I would like to declare that I hope one day, and one day not too far from now, to return to this House as the elected representative for the constituency of East Kingstown,” he said.

“I do not take it for granted that the Hon. Arnhim Eustace will contest the next general elections. But if he does, I can assure him and his colleagues that have any doubts, that he will get a terrific run for his money,” Browne told Parliament.

“More than that, my very presence in this House might be something that makes him a little uncomfortable because even here, he will have to keep on his toes in relation to the Parliament and in relation to the business of East Kingstown,” Browne further stated.

He said the ULP has a “distinguished” track record.

He further said that the ULP has a legislative and executive track record that is “beyond compare”.

“We have not seen a government in the history of our country with so much achievement in so short a time. And who would know therefore where we end when our work in this Parliament and this country is done?” he further stated.

“Mr speaker, I pledge to bring my talents to bear on the business of this House. I look forward to contribute to the development of policies and laws and to participate in decision making at the highest levels,” said Browne, a former national and Rhode scholar, who is trained in economics, maths, and statistics.

I plan to function, in and out of this House, in a manner which completely justifies the faith which has been demonstrated in me,” he further stated.

Browne said the will serve “without fear or favour the national interest of St. Vincent and the Grenadines in much the same way that the Government has been doing over the past 12 years”.

“Mr. Speaker, I come with ideas and I look forward to working with the Honourable Minister in the Ministry of Tourism, Sport and Culture, the Honourable Cecil McKie so that we can put sports on a platform that allows Vincentians to make a better life for themselves,” said Browne, who is Parliamentary Secretary in that Ministry.

“Mr. Speaker, this country must be different as a result of the contributions that we are making here,” Browne said, adding that he looks forward to a long time serving the people of St. Vincent and the Grenadines in Parliament.

Eustace, speaking before Browne, said: “The Prime Minister also made reference to Sen. Browne’s role in the political arena in the constituency that I now represent. I don’t want to make any particular comment about that except to say that I have been there for four elections, I will continue.”

Eustace, an economist and former prime minister and minister of finance, has been representing East Kingstown since 1998.