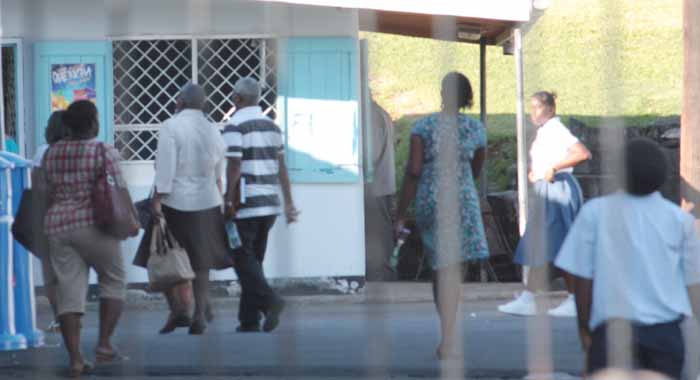 Head of the SJCK PTA, Junior Bacchus, arrives for a meeting at the school on Thursday. (IWN photo)

President of the PTA of the St. Joseph’s Convent Kingstown (SJCK), Junior Bacchus, says transferring a student who is at the centre of an on-going controversy at the secondary school might do her some good.

The reported transfer of the 14-year-old Form 4 student to the Emmanuel High School Mesopotamia has triggered a lawsuit, which has seen the court temporarily ordering that she continue her education at SJCK.

The PTA of the SJCK met on Thursday and expressed support for the transfer.

The student is said to have written, in one of her workbooks, an unacceptable and rude personal remark about a teacher.

He said students might have negative influences at a particular school but such influences might not exist at a school to which they are transferred.

“Another good thing, sending them to another school may also help them in getting back their focus on the work,” he said.

Bacchus, however, objected to the student being transferred to the EHSM, but said that is the decision of the Ministry of Education.

He said that schools in St. Vincent and the Grenadines are “rated across the line”.

“My personal view now: in terms of sending her to Mespo Emmanuel, it is like a demotion.

“I think the Ministry could have sent her to a school like Thomas Saunders. I am just commenting on how I see the child, because I am looking out for the interest of the child but it is not our duty at Convent to send the children to another school but it the Ministry who makes that determination,” Bacchus said.