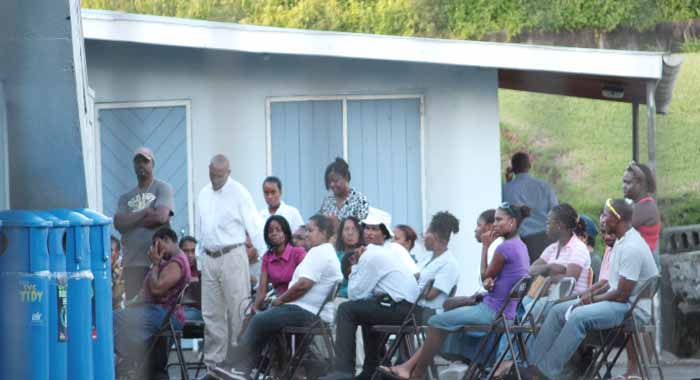 Members of the SJCK PTA met at the school in Kingstown on Thursday. Click to read story. (IWN photo)

The PTA of the St. Joseph Convent Kingstown (SJCK) says it supports the school’s decision to expel a 14-year-old Form 4 student who is said to have been rude to a teacher.

The student is said to have been transferred to Emmanuel High School Mesopotamia.

However, the court on Sept. 20 ordered that the student continue her education at SJCK until a lawsuit against the school’s principal, other education officials and the Ministry of Education is disposed of.

But teachers walked out when the student turned up for classes at SJCK last week Monday.

Teachers also called in sick on Tuesday but returned to class on Wednesday.

On Wednesday, the student is said to have been placed in a Form 4 classroom that is different from the one to which she was reportedly assigned at the end of the last school year.

The school’s PTA met on Thursday and its president, Junior Bacchus, told I-Witness News that the meeting “gave full support to the efforts of the teacher and the principal”.

He said that the hundreds of PTA members who attended Thursday’s meeting “do wish to express our uncompromising support to the principal and staff in their effort to promote and maintain the highest level of discipline and respect for the good name of the convent.

“We wish to condemn any effort that seeks to undermine the determination of the teachers to instil respect for authority, obedience, honesty, truthfulness and good order,” Bacchus further told I-Witness News, as he read a statement which he said would be circulated to the media.

“We believe that no child should be allowed to get way with open defiance, disobedience and disrespect for authority at the school. Equality must be allowed to flourish,” he further stated.

“We believe that the best interest of the child is not served by judicial manoeuvring. We are satisfied that the school’s action is for the greater good of all our children and fully support the principal and her staff in the action taken thus far.

“We encourage all parents to work together with their teachers and the school administration to resolve disputes if or whenever they arise. We therefore support the teachers in the enforcement of the rules of the school with fairness and equality,” Bacchus further said.