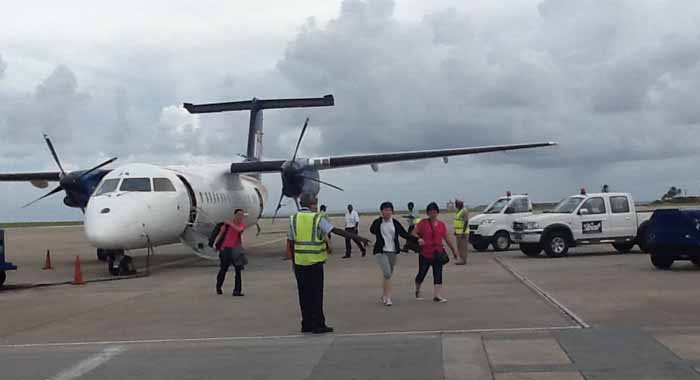 Passengers disembark the aircraft after it landed in Barbados Wednesday afternoon.

A LIAT DASH-8 aircraft was Wednesday afternoon forced to return to Barbados about midway into a flight to Guyana due to a problem with an “avionics fan”.

The aircraft landed without incident around 3:12 p.m. and a fire tender was on standby on the apron. However, passengers disembarked in an orderly manner.

Around 2:30 p.m., passengers aboard flight 521, which left Barbados around 1:15 p.m., were told that the aircraft would be returning to Barbados.

Passengers remained calm after the announcement from the flight deck and the flight attendant responded to their questions.

The crewmember explained that the navigation system was overheating as a result of the malfunctioning avionics fan.

The crewmember further told inquiring passengers that while the aircraft could have completed the flight to Guyana, the airline had decided that it would be better to return to Barbados.

The crewmember said that if the aircraft continued to Guyana, it would have had to remain there and this could have further disrupted the airline’s schedule.

The flight was originally scheduled to depart Barbados at 12:15 p.m. Wednesday but got underway about an hour later.

Passengers were told that this was a due to a delay in the aircraft arriving from St. Lucia.

Wednesday’s incident was the second on a LIAT aircraft flying the Guyana-Barbados route in recent weeks.

On Aug. 26, a LIAT aircraft landed without incident in Barbados after one of the main landing wheel fell off during take-off in Guyana.