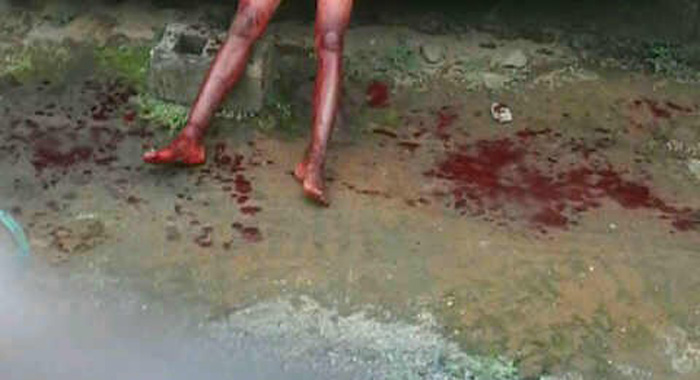 The bloody scene in Greiggs on Monday.

This country on Monday recorded its 24th homicide this year when the life of a 16-year-old youth drained from him through wounds reportedly inflicted with a pair of scissors.

The stab wounds, to the back and neck, were reportedly inflicted by a man, said to be in his 20s.

And, as another family mourns, the nation is again collectively asking “Why?”

The death of Terrance Junior John, also known as “Hot Skull” of Greiggs, sometime after 3 p.m. Monday, was not only tragic because of his age.

He died in the arms of his older brother, Lawson, who made a futile attempt to apply pressure to the wounds that are believed to have led to John’s death.

A photo circulated on social media on Monday shows the dying youth, dressed only in underpants and a cap.

His body is crimson — covered in his own blood.

He holds limply to the patio of a building and supported by his brother, who is making a valiant effort to stem the flow of blood from Terrance’s neck.

As the blood flows out of Terrance’s body, it paints red the ground around him.

John’s death brings to three the number of persons slain over the past month.

And, the nature of the killings has left the nation with more question than answers about homicides in St. Vincent and the Grenadines.

The killings do not stand up to the theories, advanced by some, that they are in some way related to the nation’s economic situation.

An I-Witness News analysis of data two years ago suggests no direct relationship between the performance of the nation’s economy and homicides.

In the December 2011 analysis, data from the previous 15 years suggested that the better the economy performs, the more killings there are in St. Vincent and the Grenadines.

However, our conclusion then was that the raw numbers were not enough to say if one causes the other.

Further, unlike the killing on Monday, which seemed to have resulted from the escalation of an altercation, the brute use of lethal force in two slayings in September suggests well-planned executions.

On Sept. 19, 28-year-old Recardo “Smokey” Roberts was gunned down in Kingstown Park.

Police are said to have recovered over 20 spent shell casings at the scene.

On Sept. 5, 36-year-old Velorne Samuel, the secretary at the Family Court, died after being shot multiple times while doing her laundry at her home in Evesham around 8 p.m.

Finding an answer to the question “Why?” is important to the nation, but even more so for the 10 children who have been left without a parent as a result of killings over the last two months.

Further, on Aug. 24, three other children lost their mother, 32-year-old Amy-Ann Tittle, when she because a homicide victim.

Tittle’s children are also at risk of losing their father, Insan Humphrey, who is charged with their murder of their mother, a crime that too place before their very eyes.

Tittle died of chop wounds to the head and neck, allegedly inflicted by Humprey during an altercation.

Meanwhile, a girl in Troumaca celebrated her birthday without a father when she turned eight years old on Aug. 17.

She will celebrate all future birthdays without her father.

Her father, 47-year-old Owen Pompey, also of Troumaca, was killed in the mountains of North Leeward on Aug. 12.

Ian Gould, a 35-year-old farmer of Lowmans Leeward is charged with Pompey’s death.