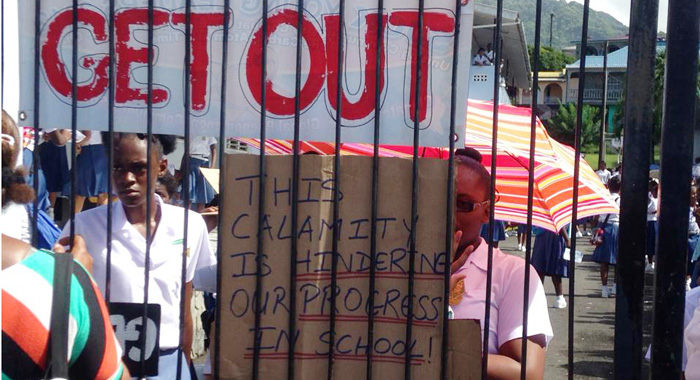 The presence of the students sparked protest at SJCK in October 2013. (Internet photo)

Classes at St. Joseph’s Convent Kingstown (SJCK) were on Monday disrupted for the second time in as many weeks.

However, unlike two Mondays ago, when teachers walked off the job, it was the educators who were left in the classroom at the Catholic school.

Students at the all-female school used placards to make it clear that they no longer counted among their numbers a student who was reportedly expelled last July.

And the school’s principal, Calma Balcombe relished the support she was receiving from her charges.

Flanked by officials from the Ministry of Education and various principals from across the country, Balcombe said she was elated by the support she has received.

Two weeks ago, teachers at SJCK walked off the job in protest of the presence of the 14-year-old Form 4 student after a court order that she return to classes pending the outcome of a lawsuit.

Jomo Thomas, lawyer for the student’s mother, and Attorney-General Judith Jones-Morgan, were expected to appear in court again this afternoon (Monday) for yet another hearing in the ongoing saga about where the student should continue her education.

The lawyers were in court on Friday, when Justice Wesley James ordered that the child remains in school and granted Thomas Judith Jones-Morgan seven days within which to file a claim form.

The judge also gave the claimants 28 days within which to respond and scheduled hearing of the substantive matter for Nov. 15.

The ruling came as the judge heard an application by the Attorney-General asking the court to overturn an earlier ruling by Justice Frederick Bruce-Lyle that the student continue her education at SJCK pending the outcome of the lawsuit.

The student was allegedly expelled from SJCK and assigned to Emmanuel High School Mesopotamia in July after writing in a workbook a rude comment about a teacher in March.

Thomas filed a lawsuit against the school’s principal, two Ministry of Education (MOE) officials, and the MOE itself.

The Attorney-General and Thomas are said to have addressed the court extensively on Friday.

However, within a few hours of the court order, the Attorney-General filed another application, asking that the court set side both the orders of Bruce-Lyle and James, respectively.

Both sides were then summoned back to court on Friday for a hearing today.

A third judge, Justice Gertel Thom, was expected to hear the application today.

21 replies on “Students protest, call for schoolmate to leave SJCK”