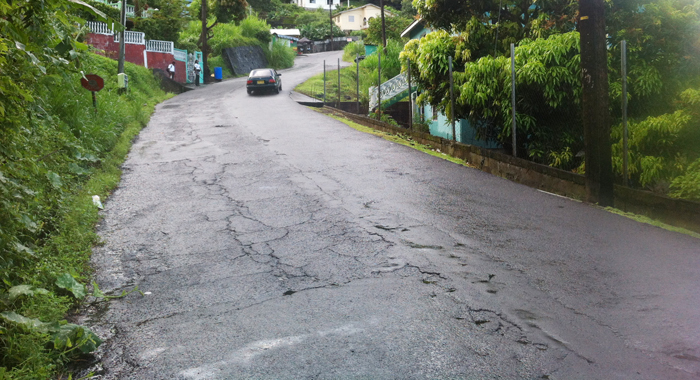 Works on the upgrade of the South Leeward Highway, which includes this span in Rillan Hill, begins January 2014. (IWN photo)

Works to widen and upgrade the main South Leeward Highway are slated to begin in January 2014 and to last 18 months.

Brent Bailey, chief engineer in the Ministry of Transport and Works, said that the road carriageway will be widened and, among other things, improvements will be made to drainage

“These increases in width represent a 5 per cent to 12 per cent increase in the present roadway,” he said.

“It may seem small but given the other challenges … as it relates to the existing structures and people’s properties and walls and land acquisitions, this was the most effective adjustment,” he said.

He further explained that in Questelles, 300 metres (1,000 feet)  of road is to be widened and realigned.

“We plan on cutting that the upper embankment, and shifting the road in,” he said of the area that is prone to landslides and where the road has repeatedly sunken in.

He further said that a sidewalk will be installed from the entry in Campden Park to the Lowmans Leeward Anglican School to the Campden Park junction (at the clinic).

“The Campden Park junction is also to be widened to facilitate easier flow of containerised traffic to the Central and North Leeward areas,” he said.

Improvement will also be made at a corner in Rillan Hill and at the junction to Buccament Bay in that same village.

He said that the environment and social assessment study provides the Ministry’s project team with the requirements for the contractor’s environmental plan.

The levels of monitoring and the critical areas to be monitored are also included.

He further said that community liaison will be appointed to ensure continued dialogues with the communities affected by the construction.

The project is out to tender, which is slated to end by Oct. 31.

“I wish to indicate that there will be significant diversions to traffic. I always must mention this. Construction is expected to last for 18 months. One lane of the road is expected to remain open but there will be challenges to be faced by the public during the time of construction. So, I want to plead again with our citizens to bear with us during this operation,” Bailey said.

The 25.3 miles (40.7 km) Leeward Highway, which extends from Tyrell Street in Kingstown to Richmond in North Leeward, was initially upgraded in the 1970s.