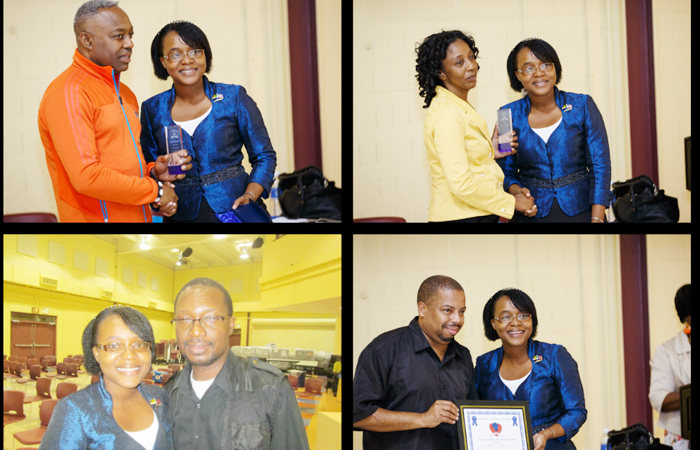 Some Vincentians in the diaspora were recognised by the fledging Democratic Republican Party (DRP) of St. Vincent and the Grenadines, led by founder Anesia Baptise.

The recognition came when the DRP held its town hall meeting in New York on Oct. 5.

The DRP recognised the contribution to nation building of four Vincentians in New York.

Baptiste also noted that although her party is one year old, Toney afforded the same treatment to her.

JEMS Hope for Home group, a group of early members of JEMS in St. Vincent and the Grenadines who now resides in New York, has been serving Vincentians at home through humanitarian efforts.

The most recent of which is the funding of a new house project for an elderly less fortunate lady of Rose Bank, North Leeward.

Both Toney and JEMS Hope for Home were presented with Sapphire Lux Glass Awards at the meeting.

Meanwhile, two certificate awards were presented to Emmanuel and Jones for their service to Vincentians in providing, gratis, live streaming of the town hall meeting via internet television and radio, accordingly.

Speaking of her party’s commendation of such service, Baptiste announced that the giving of the awards were evidence of the DRP’s intention to create a system of awards to recognize the contribution of Vincentians in the Diaspora to nation building.

Baptiste also thanked the group Citizens in Defense of Lands and Heritage Grenada for their support in sponsoring the Sapphire Lux Glass Awards.

One reply on “DRP awards Vincentians in New York”