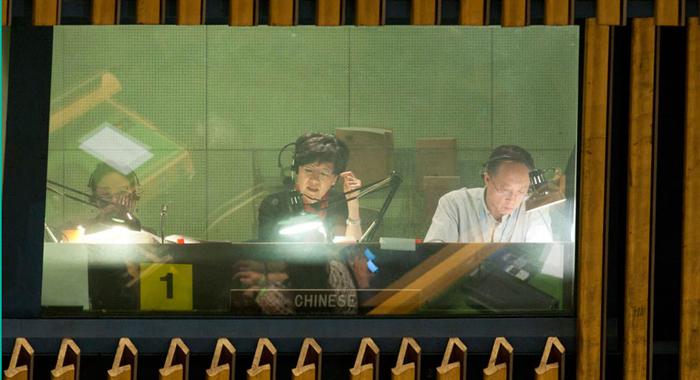 United Nations interpreters at work during the opening of the general debate of the General Assembly’s sixty-seventh session. (2012) UN Photo/JC McIlwaine

Out of potential linguistic chaos, a corps of over 100 United Nations interpreters brings order and comprehension as speaker after speaker from around the planet takes the podium of the General Assembly to give their annual speeches at the General Debate, discusses war and peace in the Security Council, or delves into arcane details of administrative and budgetary affairs in one of the Assembly’s six specialized committees.

UN interpreters have even inspired Hollywood: the linguistic specialists were featured in a 2005 political thriller starring Nicole Kidman and Sean Penn. The Interpreter, the first movie to be shot inside UN Headquarters in New York, was directed by the late Sydney Pollack, who said at the time: “You have tons and tons of visitors but most of the people…don’t know what the UN looks like and don’t understand how the UN works and don’t know what its day-to-day business is.”

But this does not mean the team has not at times found itself inadvertently embroiled in burning disputes, compounded by the speed at which some delegates speak, such as the issue of the name of the former Yugoslav Republic of Macedonia (FYROM).

A UN-brokered accord in 1995 between FYROM and Greece committed the two countries to negotiate on the name issue under UN auspices, with the republic to be referred to provisionally as the former Yugoslav Republic of Macedonia, pending a final solution. The accord obliges both Athens and Skopje to continue negotiations under the auspices of the Secretary-General to try to reach an agreement.

That’s where a pitfall opened up for one interpreter, exacerbated by the speaker’s warp speed delivery.

As Mr. Fahr took up the story: “Once, I think in the General Assembly, somebody was speaking at an incredible speed and one of the things he said was the former Yugoslav Republic of Macedonia and the interpreter, pressed for time, just said Macedonia.

“Greece was up in arms, very, very angry, and I just literally ran to the General Assembly hall and I sat behind the representative of Greece and I apologized profusely on behalf of the interpretation service for this terrible and unforgivable mistake.

“And, [I told the representative] ‘you know, it has to be taken into account that the person was speaking at a very high speed and he tried to use the shortest possible version. This was an error of judgment on the part of the interpreter but he did not mean any disrespect to the nomenclature, to the rules of the General Assembly, and I apologize.’ And that was it.”

Mr. Fahr, 54, an Egyptian who is a 30-year veteran of the Service as an Arabic interpreter, oversees a corps that numbers about 100 but swells at times of the UN ‘rush hour,’ particularly during the General Debate, which brings scores of presidents, prime ministers and monarchs to UN Headquarters in New York at the start of each annual General Assembly session in September.

At the moment, he has 109 interpreters on hand but that swelled to 137 this September and will vary over the coming months as free-lancers may be hired to increase capacity during the meetings of the six specialized Assembly committees.

UN rules of procedure have simplified the potential linguistic morass by having six official languages for all Security Council and Assembly activities, and into which all UN documents are translated – Arabic, Chinese, English, French, Russian and Spanish. It is only on very rare occasions that an interpreter will have the written text of a speech in front of him, though this may occur in the case of non-official languages.

Any Member State has the sovereign right to speak in any language it chooses as long as it provides an interpreter into one of the official languages, or a written translation and a pointer – somebody who sits behind the interpreter to point out where the speaker is at any given moment. For example, this year Iranian President Hassan Rouhani brought his own English-language interpreter.

This led to a potential nightmare a couple of years ago when Mr. Rouani’s predecessor, Mahmoud Ahmadinejad, addressed the Assembly. “The English booth got the written version but the Farsi interpreter never showed up,” Mr. Fahr said. “There was a problem with security, or something and she didn’t appear.”

“Our colleague in the English booth had an impossible choice to make – either to leave the President of a Member State speaking without an interpretation coming out of the booth or to take the plunge and start reading when she doesn’t understand a word of what he’s saying, and try to keep some kind of rhythm with him.”

“So she made the very courageous choice to start reading from the translated text and try to keep pace with him. Half way through the speech, the Farsi interpreter barged in, panting and sweating bullets, sat down and took over helping with the interpretation of the speech.”

For Mr. Fahr, the worst nightmare is if you hear a word that you don’t understand or if somebody is speaking in a very, very thick accent and you can’t make out what they’re saying. “It is then a question of what to do,” he said. “Do you attribute to them something they did not say or do you keep a dignified silence? Most of the time, it’s a dignified silence, if you can’t understand a word of what is being said because of the accent. But you can’t keep silent all the time.”

In Arabic, where the vernacular can vary greatly from country to country, this is unlikely to happen because the Arab representatives all speak in a formal cross-border Arabic, but it has occurred. “It happened to me in the Security Council when an Arab representative slipped into the vernacular and said something which I think would mean the year ‘never never’ which I’d never heard before, but I wasn’t 100 per cent sure.”

For Russian interpreter Vitaly Shevlak, 50, a nightmare scenario is “actually what we are living through every day. It’s very fast delivery, the delegates don’t have much time… basically they’re given three, four, five minutes to deliver their speeches so the tempo is very hot and you have to resort to all kinds of tricks just to be in sync with them and then to remember whatever they are saying because it’s a must.”.

“So basically we are working under extraordinarily difficult conditions these days because of the limited time that is given to the delegates.”

This is what Mr. Fahr calls the speaker’s ‘traffic lights.’ There are green, yellow and red lights on the rostrum for a five minute speech. “The green light means that you go very fast, the yellow light means go extremely fast, and the red means go supersonic,” he said. “They have the green light until the fourth minute, and at the beginning of the fifth minute they get the yellow light and after the fifth minute they get the red light.”

Mr. Shevlak always wanted to be UN interpreter ever since he was a language student back in Moscow in the 80s. “It was a kind of dream of mine but it didn’t happen immediately,” said the 25-year veteran. But he recalled the pitfalls that can lie in wait for an interpreter under pressure.

“It was during my first or second year here on the job, I misheard what the speaker was saying and instead of mentioning Sweden for some reason I said South Africa, which was very wrong, a faux pas as they say in French. But I managed somehow to catch a glimpse of the reaction of the Russian delegate… the debate was about apartheid, and I managed somehow to correct myself.”

But for a real blooper by a greenhorn, it’s hard to beat what happened to Mr. Fahr. “It was on my very first day back in 1983, and it was an Arabic-speaking representative making a statement, and I misheard something. There are two words in Arabic that are very similar so that what came out of my mouth was that the exploitation of small nations is one of the lofty goals of the United Nations Charter.

“And then I said, but O my God, the independence of small nations is one of the lofty goals of the United Nations. And then of course I was behind the speaker for a whole sentence for the duration of the speech, and then he finished and he turned to the chairman and he started picking up his papers, and I was still going on.”