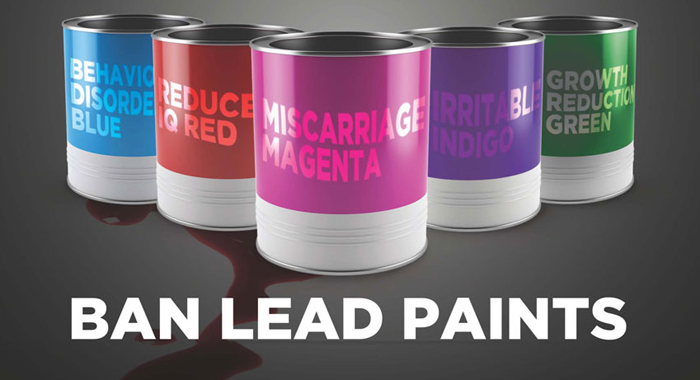 18 October 2013 – Countries should strengthen national actions to eliminate lead paint, a major source of potential poisoning for young children which causes some 600,000 new cases of intellectual disabilities each year, the United Nations health agency said today ahead of a week of activities aimed at raising awareness about this key health concern.

“Lead poisoning remains one of the most important environmental health concerns for children globally, and lead paint is a major flashpoint for children’s potential lead poisoning,” said the World Health Organization’s (WHO) Director for Public Health and Environment, Maria Neira.

“The good news is that exposure to lead paint can be entirely stopped through a range of measures to restrict the production and use of lead paint.”

On the occasion of International Lead Poisoning Prevention Week of Action, WHO chose to highlight the role that Governments play in protecting the health of workers, children and women of reproductive age through the adoption of procedures to eliminate the use of lead decorative paints and the provision information to the public on renovation of homes where lead paint may have already been applied.

The Week of Action runs from Oct. 20-26. This year’s theme — Lead-Free Kids for a Healthy Future — underscores the importance of avoiding the use of lead paint and using safe alternatives in order to prevent children coming to harm from lead poisoning.

WHO estimates that 143,000 deaths per year result from lead poisoning, with lead paint is a major contributor. Exposure also contributes to 600,000 new cases of children with intellectual disabilities every year, and the vast majority – 99 per cent – of children affected by high exposure to lead live in low- and middle-income countries.

Exposure to lead creates health problems for many years into the future. Even in countries that have banned leaded paint decades previously, such paint continues to be a source of exposure until it is finally stripped and replaced. The cost of replacing lead paint means that people living in older, poorly-maintained housing are particularly at risk, and this disproportionately affects economically-deprived communities.

“Paints with extremely high levels of lead are still available in most of the developing countries where paint testing has been conducted as part of the efforts of the Global Alliance to Eliminate Lead Paint,” said David Piper, the Deputy Director of the UN Environment Programme Division of Technology, Industry and Economics (UNEP DTIE) Chemicals Branch. “In most of the countries with lead paint, equivalent paint with no added lead is also available, suggesting that alternatives to lead are readily available to manufacturers.”

Worldwide, 30 countries have already phased out the use of lead paint. The Global Alliance to Eliminate Lead Paint, co-led by WHO and UNEP, has set a target of 70 countries by 2015.

At high levels of exposure, lead damages the brain and central nervous system to cause coma, convulsions and even death. Children who survive such poisoning are often left with intellectual impairment and behavioural disorders.

At lower levels of exposure, lead affects brain development in children, resulting in reduced IQ, behavioural changes such as shortening of attention span and increased antisocial behaviour, and reduced educational attainment. These effects are believed to be irreversible. Adults are at increased risk of kidney disease and raised blood pressure.