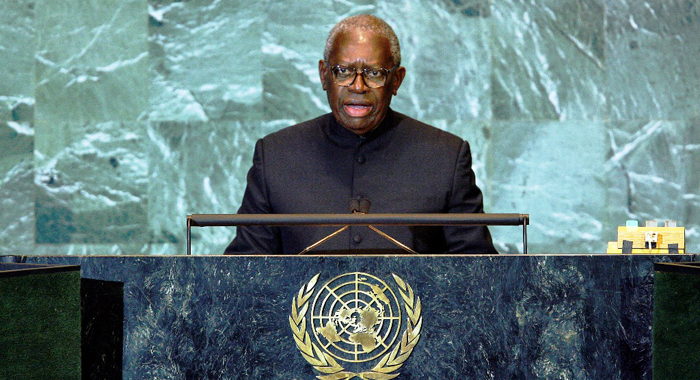 In this undated Internet photo, then president of Suriname Ronald Venetiaan addresses the Untied Nations. He resigned from Parliament on Friday.

In a letter to Speaker of the House, Jenny Geerlings-Simons, the former head of State announced that from Oct. 27, he would no longer be a Member of Parliament.

In an interview, the former leader did not give any specific reason why he is resigning. “I just want to give younger persons the opportunity to serve in this capacity,” he said. Venetiaan’s seat in parliament will now go to his fellow party member Hesdy Pigot, who was also his secretary during his presidency.

According to former speaker of the House, Emile Wijntuin, Venetiaan during his entire political career, starting as a minister of Education in 1973 and later as president, kept his integrity.

“During all those years not once was his name mentioned in any corruption scandal, controversy or whatever,” Wijntuin said.

Ronald Runaldo Venetiaan (born June 18, 1936) served as the 6th, 8th and 9th President of Suriname. His first term as president ran from 1991 to 1996 after which he lost in the elections to Jules Wijdenbosch. In 2000 however, he regained his former position on the New Front banner, receiving an absolute majority of 37 from 51 votes in the Parliament. In 2005 Venetiaan defeated Rabin Parmessar of the NDP to secure a third term as president.

In his first term Venetiaan implemented a Structural Adjustment Programme which put the Surinamese economy, which was in shambles after the 1980-1987 military dictatorship was thrown out of office through democratic elections, back on track to recovery. In 2000, Venetiaan was elected again to lead the nation after president Wijdenbosch ran the economy to the ground.

During his second and third term Suriname recorded record economic growth of over 5 per cent and gained the status of a middle-income country. During his first tenure, Suriname became a member of CARICOM in 1995. With a total tenure of 15 years Venetiaan, a physicist and mathematician by profession, is the longest serving Head of State of Suriname.