Tax-free back pay this week 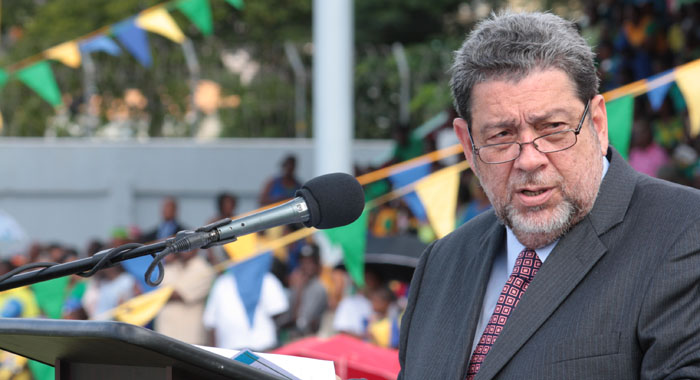 Public servants will not be taxed when they are paid this week the 1.5 per cent salary increase owed to them for almost three years.

The money is half of the 3 per cent salary increase owed to them since January 2011.

Half of the amount was paid last year, and Prime Minister Dr. Ralph Gonsalves confirmed on Sunday — Independence Day — that the money will be paid this week.

“As our government has demonstrated repeatedly, we keep our promises solemnly which we make to our people, even though sometimes, now and again, infrequently, circumstances may conspire to cause delays in the delivery of a specific promise,” Gonsalves said as he delivered his Independence Day address.

“Accordingly, in their October pay check next week, all categories of public servants, including daily-paid employees will receive backdated to January the 1st, 2011, a one-and-a-half per cent increase in salary, the balance to the heretofore-agreed salary increase,” he said as he addressed the Military Parade at Victoria Park, in Kingstown.

“Our government has had to find an additional sum in excess of $9 million to effect this payment, a worthy accomplishment in these challenging times,” he further said to cheers.

“And I want you to hear this. This retroactive salary increase is being granted, being made, being delivered tax-free,” he said to even louder cheers from the large crowd.

“By this gesture, the value of the package for the public servants is being increased by a further $1 million. I feel sure that all public servants, teachers, nurses, police officers and the other relevant categories of public employees, including the daily paid will appreciate the especial effort of our government in delivering on this solemn promise,” said Gonsalves, who is also Minister of Finance.

“When De Comrade tells you something, you must believe it,” he said, referring to himself by the name that he is commonly referred to with affection.

He said payments to public servants and some daily-paid workers will be made on Wednesday.

The other daily-paid workers will be paid on Friday, Gonsalves said, and explained that this is so, because all the necessary calculations have not been made.

“So, those daily-paid who may not get their money on Wednesday, yo’ don’t need to come up by my office. Wait until Friday,” he said.

Gonsalves also announced that for the 13th consecutive year, his government is providing tax-free concession on Christmas barrels. This year, the programme runs from Nov. 18 to Dec. 31.

“This concession brings the Christmas cheer to thousands of Vincentians,” he said, adding that 18,000 barrels were imported under the initiative last year.